Measuring the Thermal Conductivity of Nanomaterials 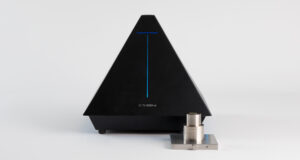 Trident Thermal Conductivity Instrument, equipped with the MTPS sensor, ideal for measuring nanomaterials and the thermal mapping of composites.

The Modified Transient Plane Source (MTPS) method developed by C-Therm provides the optimal choice for researchers in characterization the thermal conductivity of nanomaterials. Such materials are expensive and time-consuming to produce in the development phase. The MTPS has a small volume requirement of 1.5 mL, which is convenient for quick measurements, especially given the cost of large volumes of nanoparticles. The method’s simplicity allows researchers to quickly and easily characterize their samples, with no need for regression analysis. Additionally, the single-sided sensor is the only method that allows for the thermal mapping of a sample’s performance to better understand the dispersion of nanomaterials in a polymer matrix.

The following is a case highlight from a paper that can be read here. 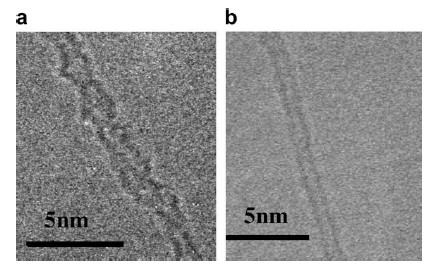 Shortened nanotubes were found to improve dispersion into polymer matrices and resulting in higher thermal conductivity.

Abstract from original publication: In this study, the hybrid effect of nanocellulose/carbon nanotube (NCC/CNT) reinforcement on natural rubber (NR) nanocomposites was investigated. To this end, three series of NR nanocomposites were prepared: NCC/NR, CNT/NR and NCC/CNT/NR. First, the nanocomposites morphology and the filler–rubber interactions were studied using scanning electron microscopy (SEM) and the swelling behavior in toluene, respectively. The results showed that the presence of NCC improved the NCC/CNT hybrid filler dispersion forming a 3D network, while the presence of CNT increased the filler–matrix interaction. The curing results also confirmed that the degree of crosslinking increased when hybrid fillers were used, but the curing time was not modified. In addition, it was observed that using a NCC/CNT hybrid system led to superior mechanical properties, dynamic mechanical properties and thermal conductivity than each material used separately. When 10 phr hybrid filler (with a filler ratio of 1) was added to NR, the tensile strength, modulus at 300% elongation (M300), storage modulus at 10% strain and thermal conductivity were all increased by 57%, 137%, 120%, and 30%, respectively. The results also showed that the NR nanocomposites properties can be controlled by tuning the NCC/CNT filler ratio. [1]

Thermal conductivity, heat diffusivity, and heat capacity of the nanocomposites were determined using a C-Therm TCi thermal conductivity analyzer. The samples were pre-pared in cylinders of 25.4 mm in diameter and 12.5 mm in thickness. Thermal conductivity measurements were performed at least five times for each compound to report average values. [1]

As electronic devices rapidly develop, questions of effective thermal management continue to grow. In small electronics, the materials selected must have high thermal conductivity to dissipate heat, while also be able to effectively connect the chips being used. One common solution is the use of epoxy composite materials.

Epoxy is a type of polymer resin, that usually has a very low thermal conductivity. Therefore, conductive nanofillers are often used to increase the thermal conductivity, making the epoxy composite an effective thermal interface material (TIM). One common nanomaterial used is called h-BN, or “white graphene” and is used for its high thermal conductivity and high electrical insulation. However, researchers have exfoliated h-BN to form boron nitride nanosheets (BNNS) which also exhibit high electrical resistance as well as having greater thermal and chemical stability.

Two epoxy composites were made, one using 51% h-BN and the other using 51% BNNS, and the conductivity results can be seen below. 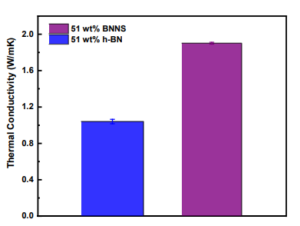 Based on these results, the BNNS exhibited better performance as a TIM, since the higher thermal conductivity would more effectively disperse the heat.