Understanding of the thermal conductivity of geological samples, including core-samples and related drilling applications, is critical in the design of both equipment and sub-surface infrastructure.  The C-Therm MTPS sensor allows for rapid characterization of such core samples under a variety of temperatures and pressures, while the TLS needle probe can assist with the characterization of aggregates and soils.

The Connecticut and Massachusetts Geological Surveys collaborated on a National Geothermal Data Project funded by the US Department of Energy through the Association of American State Geologists.  The goal was to develop information to assist in locating deep geothermal resources and provide data for better design of Enhanced Geothermal Systems in bedrock and unconsolidated sediments.  Bedrock units suspected capable of producing radiogenic heat at depth were the primary focus of this study. The samples typically range in size between 0.2 to 1.0 kg. Thermal conductivity measurements (K) in W/m/°K weremade on polished slabs of these samples using a C-Therm TCi ThermalConductivity meter which utilizes the modified transient plane source technique. 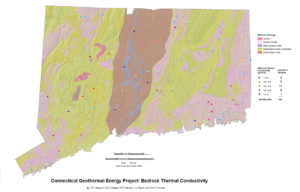 This map is part of a Connecticut Geothermal Energy Project Map Series.  All data and mapping products of the Connecticut Geothermal Energy Project are available through www.stategeothermaldata.org, a 50 State collaborative portal, built on U.S. Geosciences Information Network (USGIN) protocols and standards, and hosted by the Arizona Geological Survey.

(Editor’s Note: The following is based on excerpts from Matt Grobe’s comperehensive report for the Alberta Geological Survey titled ‘Importance of Geoscience Information in the Implementation of Closed-Loop Ground-Source Heat-Pump Systems (Geoexchange) in Alberta’)

Discussions with geothermal-energy contractor associations and with representatives from different levels of government (municipal, provincial, federal) indicate that geoscience information is important for selecting, properly designing and implementing ground-source geothermal-energy (geoexchange) systems. Geoscience information is also critical for resolving land-use issues and potential environmental concerns related to the widespread adoption of this technology.

The variability of geological materials at the surface and at depth manifests itself in the form of differing drilling conditions and differing values of thermal conductivity and thermal diffusivity. Geological maps show the types of soil, sediment and bedrock that are likely present at most locations. However, translation of these maps into useful information for geoexchange practitioners is limited because 1) published values correlating thermal properties (thermal conductivity and diffusivity) with geological material type vary quite widely, and 2) the geological material classification does not necessarily provide useful information for assessing drillability of soil and rock layers.

In addition, AGS explored the relevance of geology for the operation of a geoexchange system with a simple modelling exercise and calculated the cost effects of overestimating the thermal conductivity of a site.

The goal of this activity was to collect thermal-properties measurements for different types of Alberta’s surface and subsurface earth materials (sediments, rocks) to test the utility of producing thermal-property maps.

The planned approach was to 1) obtain thermal-property values of rock and sediment samples collected from outcrops and core samples from purpose-drilled boreholes and 2) compare the average thermal properties from core samples to actual values measured by standard in situ methods in the same boreholes.

In order to carry out measurements of thermal properties of earth materials, AGS used a C-Therm TCi™ Thermal Conductivity Analyzer.

The thermal-conductivity analyzer is based on the modified transient-plane-source technique (Gustafsson, 1991; Mathis, 1999, 2000). It uses a one-sided, interfacial, heat-reflectance sensor that applies a brief, constant heat pulse to the sample. The heat provided results in a rise in temperature at the interface between the sensor and the sample. This temperature rise at the interface induces a change in the voltage of the sensor element. The rate of increase in the sensor voltage is used to determine the thermophysical properties (thermal conductivity and effusivity,) of the sample material. The thermophysical properties of the sample material are inversely proportional to the rate of increase in the sensor voltage: the more thermally insulative the material, the steeper the increase in voltage. The analysis is nondestructive but requires a flat contact surface between the sample and the sensor. Slight sample-surface irregularities are compensated for by the use of a contact agent (usually water).

Precision and accuracy of measurements conducted on standard materials that were provided by the manufacturer are better than 1% and better than 5%, respectively.

Testing was carried out on a variety of earth materials (sediments and rocks). In order to produce a flat contact surface, unconsolidated but cohesive sediments were cut with a knife and rocks were cut with a rock saw. Cuts were oriented perpendicular to bedding. Dry rock samples were resaturated with distilled water overnight.

Thermal-conductivity measurements were obtained from nine core samples of the drift sediments and 66 core samples of the Horseshoe Canyon Formation. As mentioned earlier, the drillcore had been wrapped in plastic wrap and aluminum foil to prevent it from drying out. Core intervals were individually unwrapped and samples were taken from the centre of the core. Samples of drift sediments were quickly weighed (for determination of moisture content) and immediately placed on the TCi sensor for thermal analysis. Bedrock samples were placed directly on the sensor without weighing. Samples were visually inspected and classified into broad lithological categories (i.e., sand, silt, clay, sandstone, siltstone, shale, coal, bentonite) prior to thermal analysis. Detailed textural (grain size, sorting, porosity) and compositional (mineralogy) analyses of the samples are still outstanding, and will refine lithological classification of the samples.

Measured thermal conductivities for the recovered drift sediments (classified as sand, silt and clay) ranged between 1.8 and 3.2 W/m•K, with an average of 2.4 W/m•K (Table 5). However, given the poor core recovery (<10% of 42.4 m) in the unconsolidated drift sediments (i.e., cored intervals are mostly more competent, clay-rich silt and clay, while the less competent sand and gravel were washed out during drilling), the samples were not deemed to be representative of the sediment types encountered. As a result, a thickness-weighted average of thermal conductivity for the drift sediments could not be obtained. Moisture contents ranged from 8.2 wt. % in silty sand recovered at 10.65 m depth to 21 wt. % in silty clay from 5.9 m depth (Table 2). For the silt samples except sample 1, a general trend of decreasing thermal conductivity with increasing moisture content can be observed. The low conductivity of sample 1, taken at 0.3 m depth, may be due to the effects of weathering and the presence of distributed organic matter. 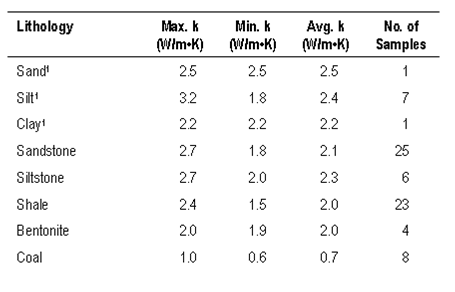 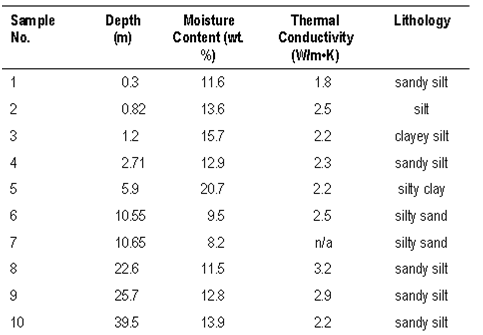 A composite thermal conductivity of 1.97 W/m•K was calculated for the 77 m of bedrock types penetrated at the Hastings Lake Community Hall site.

This work was generated by researchers at the Alberta Geological Survey (AGS).