Measuring The Thermal Conductivity of Batteries

Batteries are an energy storage solution used widely across many consumer and industrial applications.

A simple electrochemical cell consists of two electrodes, dubbed the cathode and the anode, which are separated in separate electrolyte solutions. Anions are allowed to flow between the solutions via a salt bridge, and the electrodes are connected to a voltameter to determine the electronic potential. If many cells are connected in series, it becomes a battery. Batteries can be tuned to the application by varying the number of cells or the identity of the cation and the anion.

Why Is Thermal Conductivity Important to Batteries and Their Components? 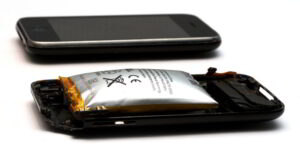 This can pose a hazard in the case of battery systems prone to thermal runaway issues – famously including Li-ion batteries but also lead-acid batteries and nickel-cadmium batteries, among others. Thermal runaway has been the cause of famous accidents, such as the crash of UPS Airlines Flight 6, reports of plane fires on the 787 Dreamliners and recreational devices such as scooters and cell phones spontaneously catching fire, sometimes while in use. Managing and reducing risk of thermal runaway in these systems is therefore a key safety priority.

However, even when the consequences of poor thermal management are not disastrous, it does come at a cost: shorter lifespan, reduced cycling efficiency, and lower storage capacity are all common consequences of battery material aging, which can be accelerated by overheating and poor thermal management. It’s therefore key from both a safety perspective and from a performance perspective to deeply understand the thermophysical considerations of the battery cycling process and the thermal hazards involved to enable rational and systematic design of effective thermal management systems.

How Do You Measure the Thermal Conductivity of Batteries?

To understand how much heat can be transferred away from the cells, an understanding of fundamental heat-transfer characteristics of the cell construction is needed.  Thermal conductivity measurement provides this understanding. C-Therm Trident offers MTPS for rapid and easy characterization of candidate materials and electrolyte solutions, requiring only one sample. Trident’s TPS thin films module enables characterization of solid phase electrolyte and salt bridge materials.

This understanding can also benefit from a multi-technique approach – TGA and calorimetric techniques to understand thermal stability, heat capacity, and heats of reaction will aid in measuring the amount of heat that is generated and how quickly the materials will heat.

Lithium-ion batteries have become a staple of everyday life: from phones, to laptops, to bicycles, to the rapidly growing electric vehicle industry. However, thermal runaway continues to be a safety concern. Thermal runaway can be caused by overcharging, overheating, or mechanical damage and often result in fire propagating throughout the battery. The use of a phase change material (PCM) as an interstitial packing material for thermal management has been explored.

PCMs were found to reduce the temperature of neighbouring cells after thermal runaway initiation. When short circuits were not initiated, cells without PCM insulation reached 189°C, compared to 109°C with PCM. Meanwhile, when short circuits did occur, tests without PCM fully propagated into violent fire. However, with PCM, propagation was prevented by conducting heat away from the cell, leaving neighbouring fuel cells below 120°C.

For more information on this experiment, see the full publication.

Lithium ion batteries for commercial use pose barriers due to safety, cost related to cycle life, low-temperature performance, and thermal effects in the battery (overcharging can result in explosion).  Better battery thermal management systems (BTMS) are being explored, with both active cooling (fans and liquid) and passive cooling (Phase Change Materials (PCMs)).  Thermal conductivity enhancement of these PCMs with carbon based nanoparticles was investigated.​

Investigating the thermal conductivity enhancement of PCMs for batteries was performed with a Modified Transient Plane Source sensor from C-Therm.  Testing was done before and after phase change (in solid and liquid state) of pure wax, 5% loaded and 10% loaded samples. 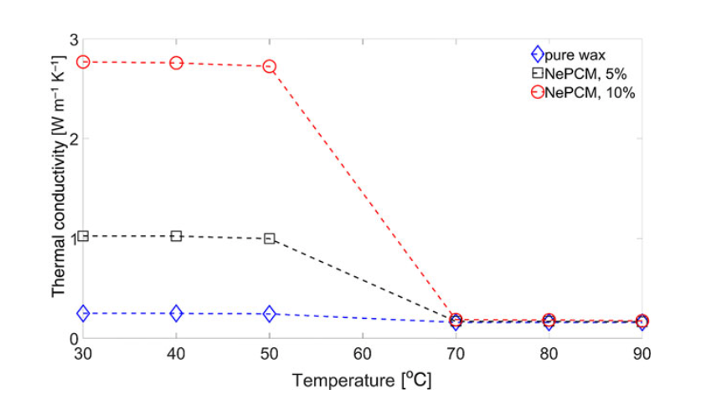 Significant increases in thermal conductivity were observed, going from 0.25 W/mK to as high as 2.75 W/mK.  Using 2mm layer of 5% and 10% weight loading, the PCM can maintain battery temperature 1.2 and 1.9℃ lower, compared to pure paraffin.