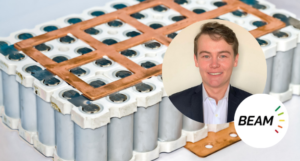 Lithium-ion batteries have become a staple of everyday life: from phones, to laptops, to bicycles, to the rapidly growing electric vehicle industry. However, despite their advantages in energy density, they continue to pose ongoing safety challenges. One of these challenges is known as thermal runaway; a chemical phenomenon where the anode, cathode, and electrolyte irreversibly react, creating an elevated temperature and pressure, often culminating in fire. This can be caused by common occurrences such as overheating, overcharging, or mechanical damage. This case study features the modified transient plane source (MTPS) method for thermal conductivity measurement, recommended for researchers and engineers concerned with the thermal management of batteries.

We are pleased to welcome special guest speaker Dr. Sam Plunkett, Director of Battery Technology at Beam Global (AllCell Technologies is now part of Beam Global). The importance of thermal conductivity in the thermal management of lithium-ion batteries will be discussed. Since 2001, Beam has specialized in the use of patented phase change composite (PCCTM) in the thermal management of electrochemical batteries and fuel cells.

Sam will be discussing the promising applications of PCCTM as a passive thermal management system for lithium-ion batteries. The way in which it dissipated heat, as well as the importance of a high thermal conductivity will be covered, as well as a comparison between the use of PCCTM and air as an interstitial material between battery cells. Sam will discuss the benefits of PCCTM in improving battery safety with focus on emerging requirements including the UL9540a thermal runaway propagation test standard.