Phase change materials (PCMs) are substances with a high latent heat (typically of fusion) which may be used to store a large degree of heat energy by melting and crystallizing at a certain temperature. PCMs can be organic, inorganic, eutectics, and hydroscopics (where the phase change is not a change of fusion but rather of absorption and desorption of water vapor). A key performance metric of a PCM is its ability to exchange heat with its surroundings – a metric which is often referred to as “thermal inertia” or, more commonly, “thermal effusivity.” A higher thermal effusivity allows a material to be thermally activated in a more rapid manner – and therefore more thermal load can be stored during a dynamic thermal process. In short: PCMs with higher thermal effusivity can absorb or release more thermal energy, faster.

Thermal effusivity is governed by the following equation: 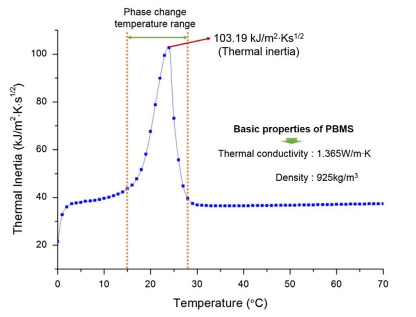 How thermal effusivity describes the ability of a material to exchange heat with its surroundings is a large part of why not only k is important to PCM performance, but also the volumetric heat capacity, or

The C-Therm TCi Thermal Conductivity Analyzer is primarily known for its ability to measure the thermal conductivity of materials – however, it also directly measures the thermal effusivity of materials. It is compliant with existing standards for the measurement of thermal effusivity via the Modified Transient Plane Source method (ASTM Standard D7984).

A sample of paraffin wax, a commonly used base for many organic phase-change materials, was obtained and its thermal effusivity was monitored as a function of temperature on cooling through the phase change. The resulting data is plotted below in Figure 2: 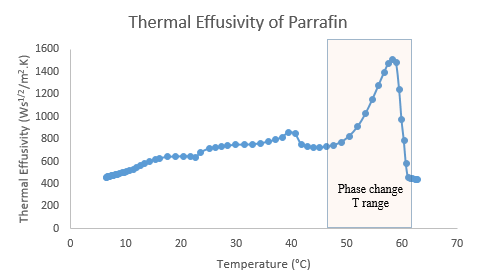 Figure 2. Measured thermal effusivity of paraffin as a function of temperature

At the highest point, the measured thermal effusivity is 1.49 x 103 Ws1/2/m2K. Aside from the phase transition highlighted in pink, the data plotted also exhibits a peak near 40°C and another near 22°C – it is fairly common for paraffins to exhibit crystal-crystal transitions in the latter, and the former is explainable by the melt of a minor component with a shorter chain length than the bulk of the wax. The performance of paraffin in this metric is best illustrated by comparison to the results obtained by the Korean group, whose shape-stabilized PCM exhibited a thermal effusivity at its peak of 103.19 x 103 Ws1/2/m2K – nearly two full orders of magnitude larger. As expected from the well-known thermal performance issues of pure paraffin in phase-change applications, this suggests that paraffin has difficulty exchanging heat with its surroundings, which limits its utility as a PCM.