The following Application Highlight features the use of the Modified Transient Plane Source method in the  thermal conductivity and effusivity testing of various foams, insulations, and fabrics used in the construction of an EV car seat.

Interactions between the human body and the materials it is in contact with can play a significant role in perceived quality as well as general comfort. Mechanical properties of the materials are important from a structural aspect of performance; however, thermal properties also play a vital role in overall perception. Upon initial contact, a material’s thermal effusivity can help induce a feeling of warmth or coolness which is known to be key factor in sensory comfort which must be tailored depending on the intended use. The property of thermal conductivity can play an important role when heat dissipation is required around temperature sensitive components, or when the determination of R-value (Thermal Resistance) may be required to ensure optimal system conditions. Herein we discuss the aforementioned thermal properties as they relate to the materials used in an EV car seat.

The thermophysical property that directly dictates perceived feel is known as thermal effusivity. As a metric it can be used to quantify the touch performance experienced when a material is in contact with the human body. Materials with a low thermal effusivity feel warmer and materials with a higher thermal effusivity feel cooler. The industry led standard, ASTM D7984, utilizes C-Therm’s patented Modified Transient Plane Source (MTPS) technology for this is measurement. C-Therm’s MTPS sensor is the only standardized instrument for the direct characterization of the thermal touch properties of textiles and other materials. With respect to a car seat, the thermal effusivity of the top layer plays a vital role in perceived comfort and quality as it is the largest surface in contact with the human body while inside a vehicle.

The following data was collected using the MTPS under ambient temperature conditions. Results are the average of 10 measurements taken over 2 test sets. As can be seen, thermal effusivity of the faux leather material (518 Ws1/2/m2K) was over 3x higher compared to a 100% polyester fabric (135 Ws1/2/m2K) used for comparison, indicating a significantly cooler feeling material. 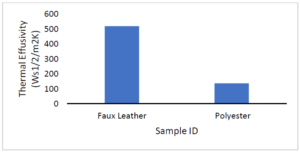 Underneath the top layer, various foam materials were used to construct the seat (see Figure 1). The base foam comprising the majority of the seat had a relatively higher density compared to the other materials, which is likely a consideration from a structural performance aspect. The base foam was however slightly compressible and therefore the thermal conductivity is susceptible to changes based on compressive load. Understanding the influence of compression and its connection to thermal conductivity can be important during material selection and product development. C-Therm’s MTPS sensor can be combined with a Compression Test Accessory (CTA) to evaluate material performance under various compressive states to allow for high quality, representative material testing.

The following data was collected using the MTPS under ambient temperature conditions. Results are the average of 10 measurements taken over 2 test sets. The sample was tested under increasingly higher force loads ranging from 10-500 gf. Thermal conductivity was found to increase with increasing force. As a note, not only was thermal conductivity found to change with increasing force, but due to the physical compression of the foam, overall thickness was decreased as well. As such both parameters for R-value determination would be influenced by these changes (R-Value = thickness divided by thermal conductivity). 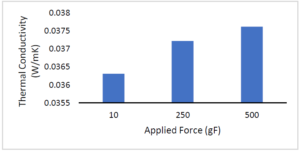 Figure 3 – Thermal conductivity results of the base foam as a function of applied force load.

In between the base foam and the outer top layer, was a layer of lower density foam that incorporated a heater wire used for the seat warmer. This foam had difference surface finishes on the top and bottom side. Side A (side next to the heater wire) had a polymeric mesh lining, while Side B was plain without any notable modification. It is likely that the mesh siding aided in securing the heater wire to the foam base, however it also has an influence on the thermal dissipation performance, which could contribute to a more even spreading of heat over the seats active area. Investigation of both sides of a material can be useful to quantity side specific differences, which is observed quite often in more complex sample construction/geometries. 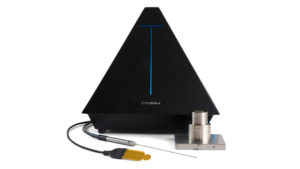 The following data was collected using the MTPS under ambient temperature conditions. Results are the average of 10 measurements taken over 2 test sets. Side A was found to have a thermal conductivity of 0.038, while Side B measured 0.035 indicating slightly better heat dissipation properties on Side A. 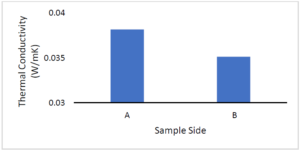 Thermal Physics Concepts: The Role of the Thermal Effusivity

This blog is a part of our Automotive and Textiles applications.