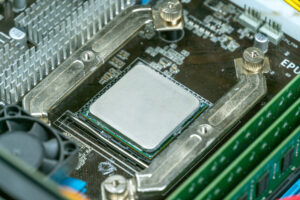 Thermal compound on a processor. It is important that the compound has a high thermal conductivity to dissipate heat effectively.

Thermal interface materials (TIMs) are commonly used in electronics and batteries to facilitate the transfer of thermal energy away from heat generating components (i.e., CPUs, battery cells, etc.) to cooling hardware (i.e., heat sinks). TIMs are designed to fill the void space present between components, which can otherwise act as thermal insulation (thermal conductivity of air ~0.02 W/mK). The performance of a TIM is therefore highly subject to its thermal properties, amongst which thermal conductivity and thermal impedance are two of the most notable in industry.

Thermal impedance is a measure of the sum of a) thermal resistance and b) thermal contact resistance of a material. Thermal resistance (or R-Value) is a thickness dependent property which describes its ability to resist heat flow. R-Value can be determined by dividing the material thickness by its’ thermal conductivity. Thermal contact resistance is related to the surface contact made between the material and the other interfaces it “touches”. Although TIMs provide better contact between the two, these surfaces are still not perfectly flush and micro-air voids are still present which reduce the effectiveness of heat transfer. Therefore, a materials surface roughness/flatness is highly influential on its thermal impedance properties.

Thermal impedance measurements are typically done using a TIM Tester which conforms to ASTM D5470. This method provides a measurement of thermal impedance which can then be used to calculate “apparent” thermal conductivity. A TIM Testers is classified as a steady-state technique and consist of a setup similar to that shown in the figure below. An accurate measurement of sample thickness during testing is required for the calculation of the apparent thermal conductivity.

A noteworthy aspect of the test method is the stated pressure requirements. Depending on the type of TIM, pressures of up to 500 PSI may be required for measurement. This level of pressure can significantly alter the mechanical properties of the material through densification which is known to have a resulting influence on thermal performance. While this may sound beneficial, the potential for positive bias in the apparent thermal conductivity calculation is something to consider when employing this technique. Lastly, it should be noted that no specific precision or bias statements are listed for this method. The standard does state results from a round robin study on the calculation of apparent thermal conductivity which were found to be +/- 18% of the mean values from all laboratories involved.

The Modified Transient Plane Source (MTPS) and Transient Plane Source (TPS) are two contact-based methods for thermal conductivity characterization (see Figure 2). While differing in design and operation, they represent another avenue for the thermal characterization of TIMs. In both cases thermal conductivity is determined though means that do not involve thermal contact resistance of the material. In fact, thermal contact resistance is either overcome during the test setup through means such as a contact agent or during the data analysis which involves the removal of the impacted region (generally the first few seconds of the measurement). As such, thermal conductivity is determined in a more direct way and is also independent of material thickness. Detailed information on the MTPS and TPS methods can be found here.

A final point on the thermal performance of TIMs is related to the directional dependent properties of the material. Anisotropy is common in many polymeric materials, especially those that contain fillers. The ability to assess directional dependent performance can be critical to understand the overall influence on system performance. Systems containing anisotropic materials can behave significantly different than those without and assuming one or the other can lead to mismatches between expected and actual performance. Due to the setup requirements for a TIM Tester, anisotropic data is not able to be determined directly imposing an limitation on material characterization potential. In contrast, both MTPS and TPS methods can perform measurements of anisotropic materials and provide both in- and through-plane thermal conductivity values.

While thermal impedance can provide valuable material information, the use of this measurement for the determination of “apparent” thermal conductivity has its limitations and is subject to potential bias due to the high force load requirements of the TIM Tester apparatus.  While arguments can be made for both properties, thermal conductivity is largely viewed as the key performance metric for heat transfer and the most commonly used in thermal simulation studies. Transient-based methods provide a more practical route for the determination of thermal conductivity and allow for the measurement of both isotropic as well as anisotropic materials.

This blog is a part of our Thermal Interface Materials (TIMs) & Dielectrics application.