A printed circuit board (PCB) is defined as an item which, “mechanically supports and electrically connects electronic components using conductive tracks, pads and other features etched from copper sheets laminated onto a non-conductive substrate.” (definition courtesy of Wikipedia). PCBs may be single- or double-sided, and may have multiple layers. Some have components embedded to allow for complex and advanced circuitry (Figure 1). 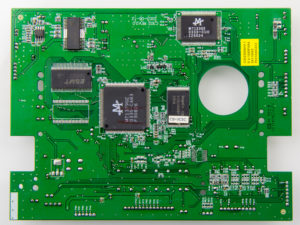 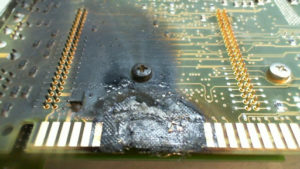 Figure 2. A PCB with a visible failure, caused by overheating. Such a failure can be due to poor thermal management (Source).

Here, we detail how the C-Therm Technologies TCi sensor may be used to aid in PCB heat management design. This application note comes with a special foreword by Doug Brooks, a PCB design expert, regular contributor to industry publications such as PCB Design 007, and owner of UltraCAD Design, Inc:

For the last 25 years I have owned a printed circuit board (PCB) design service bureau. The “hot” topic in PCB design is high-speed signal integrity. But on another front, PCB designers may be interested in how hot (literally) an individual PCB trace becomes. Trace temperature is directly related to reliability. In the extreme, a trace that is too hot can melt the solder or cause a board to delaminate. But generally we want trace temperatures to be a lot lower than that. For very high reliability applications (e.g. manned space, medical, etc.) we may want to design very conservatively. For consumer products we can be a little more aggressive. For applications in a hot desert (think war time) we may want to know how much heat we have to dissipate through some external means. The trace reaches a stable temperature when the heating of the trace equals the cooling of the trace. The heating of the trace is caused by the I2R (power) drop across the trace. The cooling of the trace is primarily the result of conduction through the dielectric (board material), and secondarily through convection and radiation. It is only in the last 10 years that the industry has recognized the importance of the dielectric in the trace cooling process. The important material property in trace heating is the resistivity of the trace material (typically copper foil or plating.) Although the actual resistivity of a trace is subject to some discussion in the industry, most estimates are that it is between that of pure copper (1.7 µOhm-cm), and about 2.1 µOhm-cm.  The important material property in trace cooling is the thermal conductivity (W/mK) in the x,y plane and in the z axis. This can vary significantly between material offerings and even between manufacturers for the same material specification. Moreover, not all manufacturers provide a thermal conductivity specification, particularly in the z-axis. The C-Therm Thermal Conductivity Analyzer can be an important tool in measuring the thermal conductivity of a board material or in verifying that a manufacturer’s product meets specification. For more information about the relationships between PCB trace current/temperature see the series of five papers posted at www.ultracad.com (with at least two more coming in future months.) 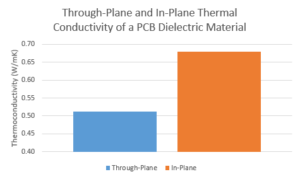