Avoid Convection Errors in Measuring the Thermal Conductivity of Liquids

In this session, we discuss recent nanofluid research report from Shanghai Innovation Institute for Materials, School of Environmental and Materials Engineering and Shanghai Polytechnic University. C-Therm’s Trident Thermal Conductivity Platform allows for the measurement of thermal conductivity of liquids, making it ideal for engineers and researchers involved in testing nanofluids. 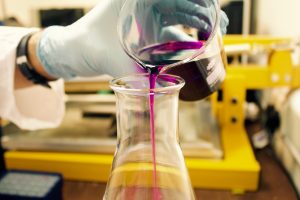 Abstract: We will highlight the convection issue and consistency of test results in nanofluid testing. Convection is commonly described as another form of energy transfer of heat from one place to another by the movement of fluids. Heat transfer via convection in liquids is not the same as heat transfer via thermal conductivity and in fact is a source of error in the measurement of thermal conductivity in testing fluids. We will have a discussion on the optimal choice for researchers in the thermal properties characterization of nanofluids.

Traditional methods for thermal conductivity testing of liquids (Transient Line Source, Transient Hot Wire, etc) can be prone to convection errors due to high power levels, large sample volumes, and long test times. C-Therm’s TCi Thermal Conductivity Analyzer was however specially engineered to handle both liquids and solids. Employing the Modified Transient Plane Source (MTPS) technique, the TCi negates the impact of convection by employing a very short-test time (0.8 seconds) and lower power setting (37 mA) using a small volume of sample (as little as 2 mL). The effectiveness of the MTPS method in dealing with convection is widely confirmed both experimentally and numerically with Finite Element Modelling (FEM) simulation.