Traditional intumescent coatings are widely used as passive fire‐protective coatings for steel structures as they are capable of expanding in the range of 20–50 times the original thickness thereby providing excellent insulation. However, the fragile nature of such residue and susceptibility to thermo‐oxidation given their carbonaceous nature are key problematic issues. The concept of in situ ceramization is explored in this work as a means to form inorganic cohesive char with improved rigidity and thermo‐oxidative stability. Coating samples were prepared by incorporating ammonium polyphosphate, talc, Mg(OH)2, and polydimethylsiloxane as additives into acrylic resin at different weight fractions. Thermal analysis and x‐ray diffraction have confirmed the reactions between the additives to form various crystalline magnesium phosphate phases, and to a small extent, silicon phosphate, thereby ensuring the thermo‐oxidative stability of the residue. This is reiterated by the fire performance tests (by exposing the coatings to a temperature profile in a furnace similar to ISO 834 fire curve). Despite the advantages of rigid char and its thermo‐oxidative stability as a result of formation of inorganic phosphates, the lack of swelling has resulted in relatively poor insulation capabilities of the char, and subsequently, compromised the fire protection times (that are in the range of 45–55 min). However, pyrolysis flow combustion calorimeter results of the coatings are promising and have shown a significant drop of up to 70% in the peak of heat release rate values as compared to neat resin. 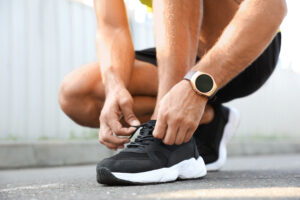