This post highlights the use of C-Therm’s TCkit for testing geological samples. 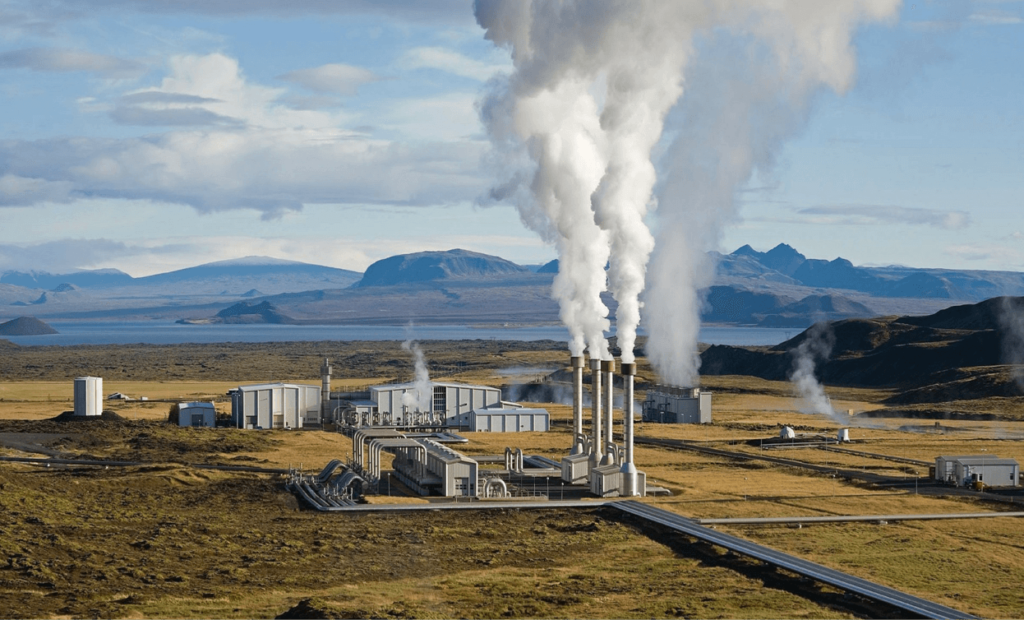 On a recent blog post, we have discussed the importance of thermal conductivity for geothermal research, particularly looking at a publication by a group of scientists from the British Geological Survey (BGS) in which C-Therm’s Modified Transient Plane Source (MTPS) method was used to measure the thermal properties of some UK bedrock materials.

However, there are other options for testing geological samples, such as C-Therm’s TCkit, a low-cost capable kit that employs the Transient Plane Source (TPS) technique for doing basic thermal conductivity work – including geological samples. This technique does not require a contact agent, which might be particularly important to note when dealing with different levels of porosity in the samples. For more advanced instrumentation, please check C-Therm’s Trident Thermal Conductivity Instrument, which offers three different methods for measuring thermal conductivity. 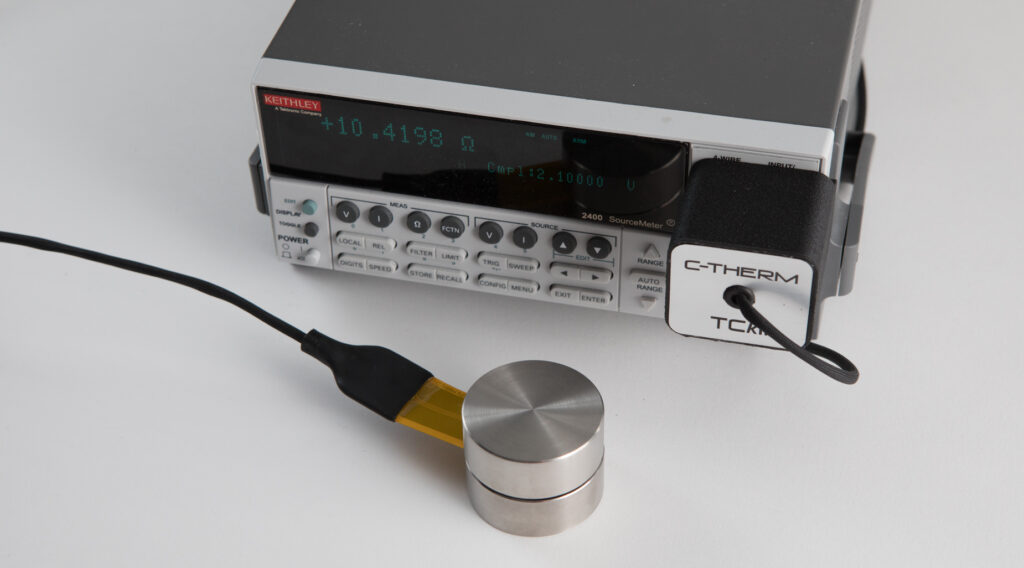 As part of an ongoing study, researchers from the Department of Geology at the University of New Brunswick (UNB), Canada, alongside professionals from the New Brunswick Department of Natural Resources and Energy Development [1], have used C-Therm’s TCkit to analyze the thermal conductivity of different geological samples from across the province.

The first step of this research included a thorough review and examination of well records as well as heat flow maps from previous publications. As shown below, less than a dozen sample sites were included in previous studies for the province of New Brunswick (NB), resulting in highly generalized maps that suggest a broad region with potential for geothermal development in southern NB. 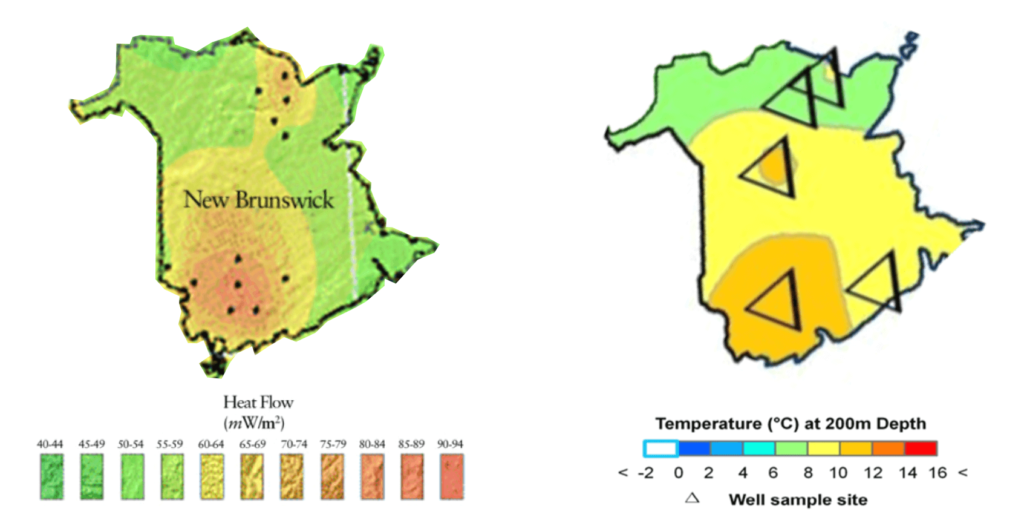 After analyzing and filtering data from over 700 reports, the team used over 100 data points combined with a map-building software to produce a series of geothermal gradient maps for the province. This indicates geothermal potential is much more localized. 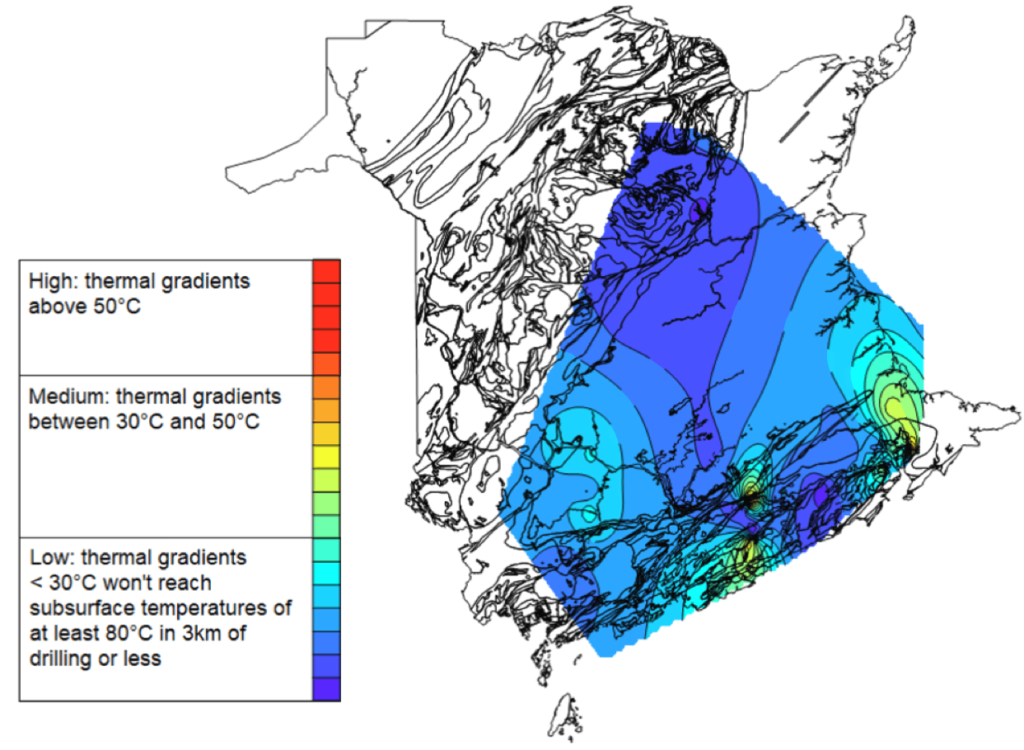 To confirm the results seen in the maps, the researchers then acquired rock samples from drill-core across the regions of interest in order to test them for thermal conductivity using C-Therm’s TCkit. Thermal conductivity varies with density, saturation and composition. It is critical to understand the effective thermal conductivity of the local geology in understanding the potential for geothermal energy harvesting.

According to Joseph de Luca, one of the authors of this study, rocks with very low thermal conductivities can act as good insulators, and when you have this good insulation you can accept colder measured temperatures in the sub-surface because they are not necessarily negative indicators for high geothermal gradients in the sub-surface and, therefore, good geothermal production potential. On the other hand, rocks with very high thermal conductivities can sometimes produce what is known as the heat chimney effect, so they draw a lot of heat from their surroundings and they funnel it out the top like a chimney, and these types of rocks are thought to be excellent indicators for geothermal potential.

41 cores – that represent 9 types of rocks – were tested using the following method [1]:

1. Fully-dried cores cut in half or thirds, inner surfaces polished;
2. Tests performed at STP on a flat tabletop;
3. Sensor repositioned after every valid test;
4. 10 minutes allotted for sensor cooldown between tests;
5. Weighted aluminum puck used improved contact between core surfaces and sensor, plastic box used to reduce external vibrations;
6. Each test set included four tests per core cut to account for rock heterogeneity;
7. Five of these cores were later submerged in water for one week for additional testing.

The table below presents a sample of the data acquired during the study, with the average measurements for four core samples and the test data detailed for basalt and granite.

When comparing the tests with previous research for basalt and granite, we can see that the TPS technique had a greater measurement consistency. The UNB project indicates higher thermal conductivities for basalt than previous studies, which could be due to multiple factors not yet investigated. However, the highest thermal conductivities were registered for evaporites (anhydrite, halite, and potash), which agrees with previous studies and supports the geothermal gradient maps: areas with higher temperatures correspond to where there are known evaporite bodies present in the sub-surface. 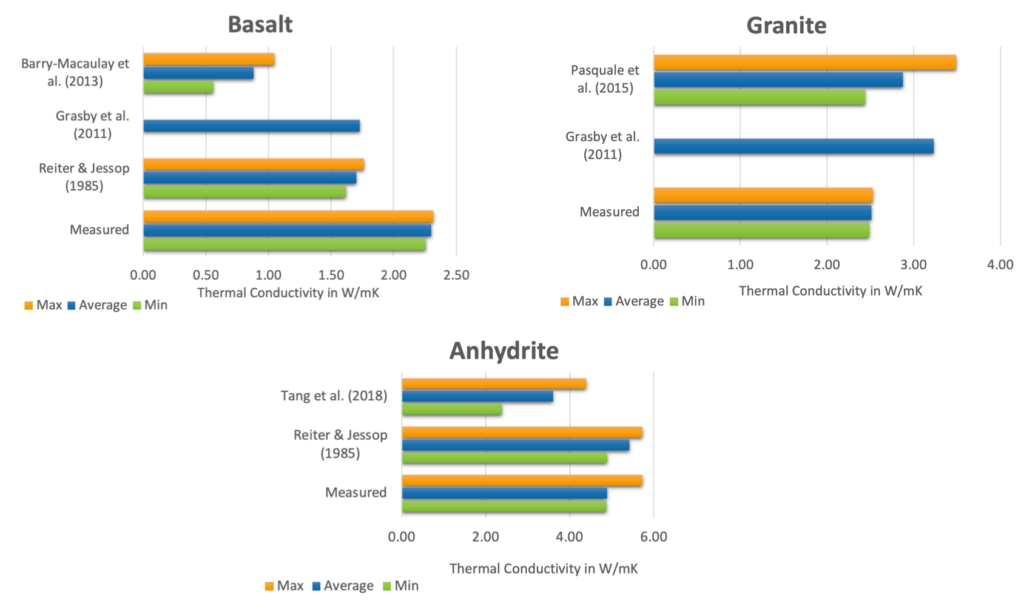 These results, in combination of different analyses, can support a better understanding of the most viable locations for geothermal-related energy production, as presented in the map below, in which the warmer colors indicate that less drilling would be necessary to reach the minimum temperature of 80°C required for considering geothermal extraction.  Ongoing work is revisiting the geophysical reports in the locations of subsurface evaporite bodies, and using the recorded rock stratigraphy and measured geothermal conductivities to better model temperature gradients. 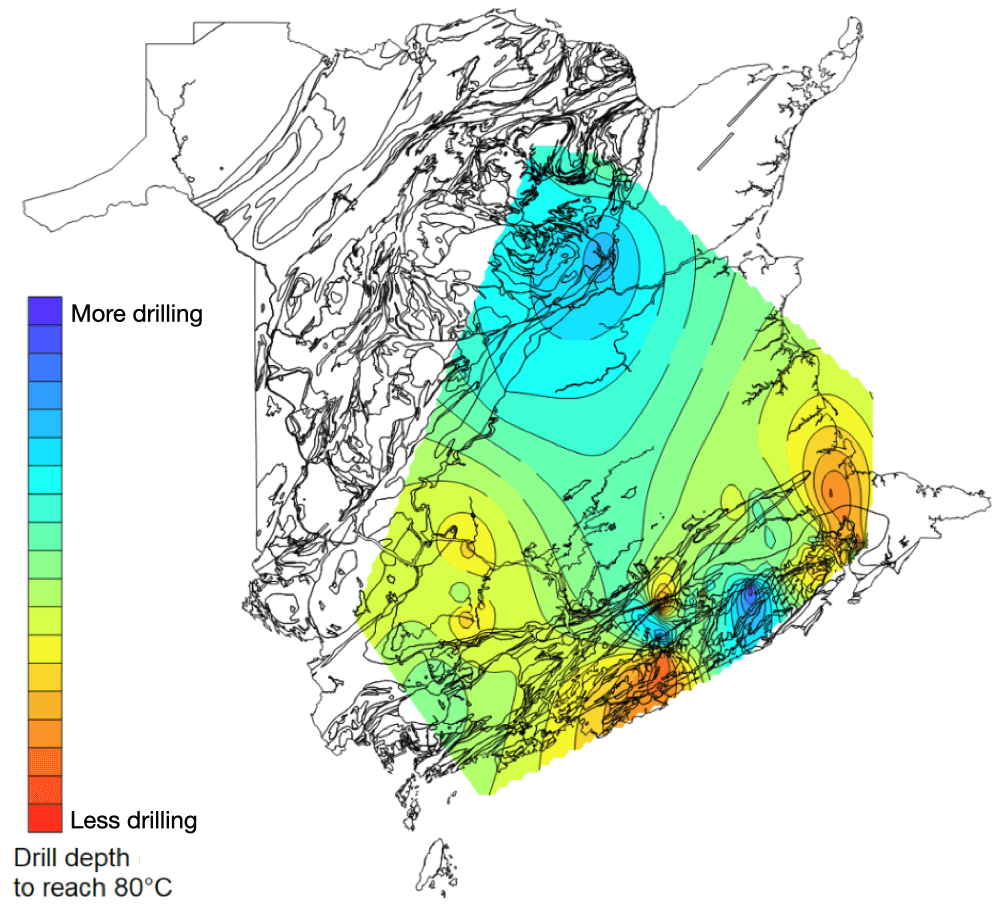 Other previous studies have used TPS in similar analyses across the world, also presenting the connections between geological samples thermal conductivity testing with geothermal potential.

A research from 2018 used temperature data from 135 coalfield exploration boreholes and thermophysical tests of 43 rock and coal samples from China, to determine the distribution of terrestrial heat flow and the geothermal gradient in the study area [2]. The results showed that the thermal conductivity of the coal-bearing strata ranges from 0.357 to 3.878 W/(m.K) and averages 1.962 W/(m.K) and also that thermal conductivity is controlled by lithology and burial depth. This attribute progressively increases for the following lithologies: coal, mudstone, siltstone, fine sandstone, and limestone. For the same lithology, the thermal conductivity increases with the burial depth [2].

Another study from the same year presented measurements on the thermal properties of granitic rocks collected from a nearly 1000-m deep well in Central Portugal, also using the TPS technique [3]. On this study, at room-temperature, the granite presented, on average, a thermal conductivity of 3.1 W/(m.K), and the team stated that different temperature corrections for thermal conductivity would be used in future studies to calculate geotherms and to assess the deep geothermal potential in central Portugal [3].

When looking at these research and data, thermal conductivity presents itself as a key component of this type of analysis, which can be crucial for future developments in this field. C-Therm’s MTPS, TPS, and TLS methods are great options to study strata. 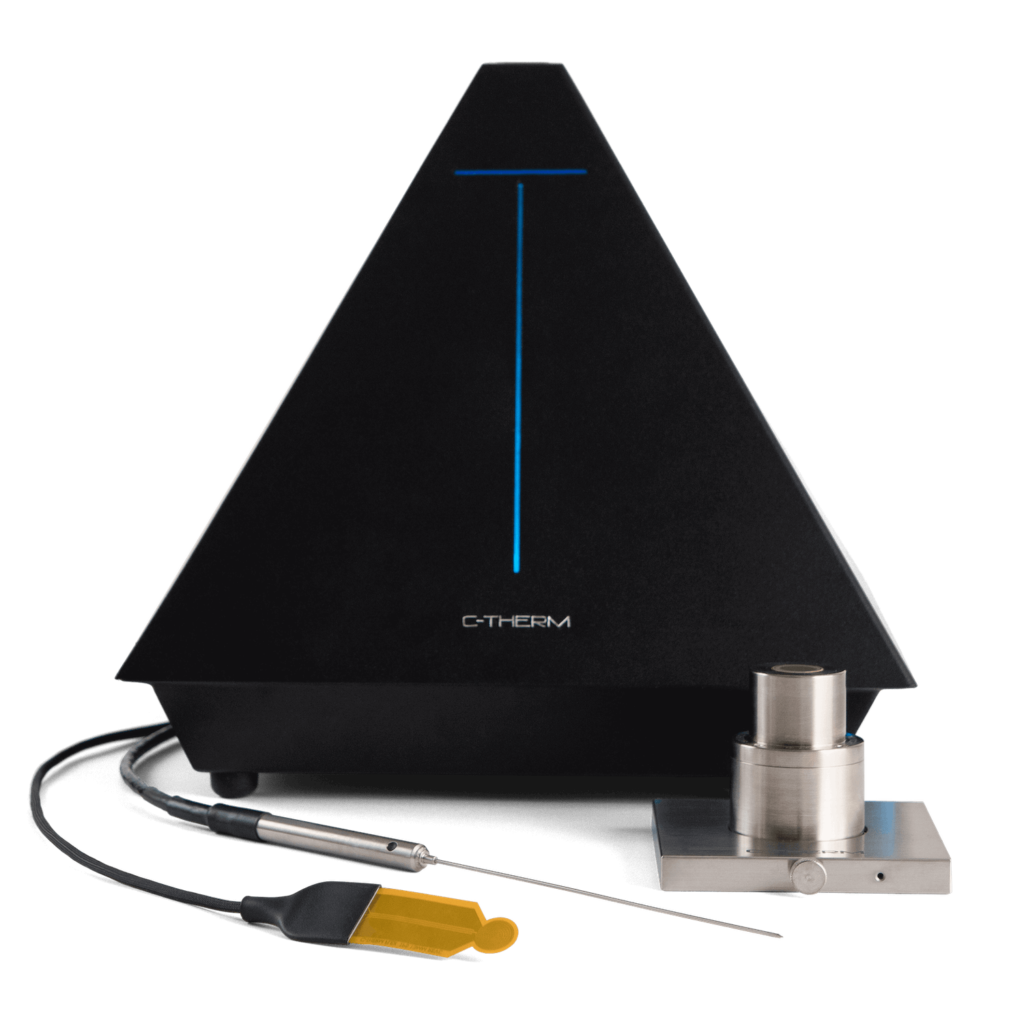 For more information on Trident or its methods applied to different research fields, please contact a subject-matter expert from C-Therm.

You may also be interested to learn of C-Therm’s new TLS-HT300 which has been developed for application of testing the thermal conductivity of geological samples at elevated temperatures (300ºC) and pressures (3000 PSI). Learn more here.