As electric vehicles (EVs) become more advanced, research to find longer lasting, cheaper, and more powerful EVs has taken off. Automotive companies are starting to develop electric vehicles in hopes of replacing gas operated vehicles in the future. Companies such as Mini (BMW), Volvo, and Cadillac have committed to only selling EV cars in the next 10 years [1]. 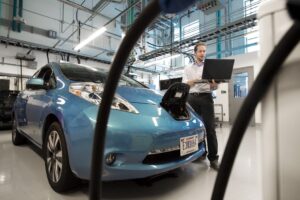 Research conducted by McMaster University looked at a variety of electric motor cooling solutions to address thermal management. One of the proposed solutions to the heat generation of motors was to produce a polymer-potting compound product to lower motor operating temperature (also known as axial cooling) [2]. The graph below shows the baseline cooling and the axial cooling method in comparison. 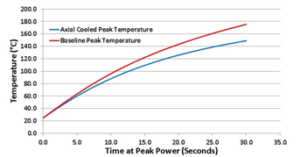 As shown in Figure 2, the axial cooled peak temperature is about 20°C lower than the traditional baseline cooling. Additionally, it was found that as the thermal conductivity of the polymer potting compound increases, the operating temperature of the motor decreases. There is high potential for a high thermal conductivity potting compound, but this area needs further development.

Nowadays, most EVs use lithium-ion batteries. Lithium-ion batteries have high energy density and a long life-cycle. Although they are becoming more powerful, these batteries can have significant disadvantages. If overheating of the battery is not properly addressed, in a worst scenario, thermal runaway can cause serious damage to the product and potential injuries to the users. Multiple EV companies have reported cases in which uncontrolled thermal runaway resulted in a vehicle fire. Hence, thermal management is essential to address the thermal issues of electric batteries, motors, and power electronics.

PCMs are a passive cooling method, as they can absorb heat around the battery module. “The heat will be stored in the form of latent heat and the increasing temperature will be minimized [3].” Highly conductive materials such as graphite have been used in PCMs and achieved low battery temperature. A PCM’s thermal conductivity is an important attribute in  the overall PCM’s effectiveness. 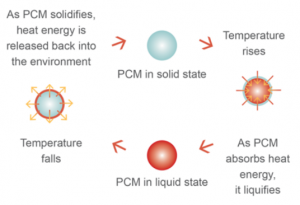 Figure 3: PCM in a nutshell

In a study by the Chemical Engineering Department at Tarbiat Modares University, Tehran, scientists looked at enhancing the temperature control of batteries by using phase change materials and aluminum wire mesh plates. Polyethylene Glycol 1000 (PEG1000) was used as a phase change material. Aluminum wire mesh plates were used to enhance thermal conductivity. PEG 1000 has a thermal conductivity of 0.23 W/mK and the aluminum mesh has a thermal conductivity of 203 W/mK [4]. The highly conductive aluminum helps with heat dissipation from the cell surfaces to the PCM. The chart below shows the temperature profiles of the battery during the discharge rate of 3°C [4]. 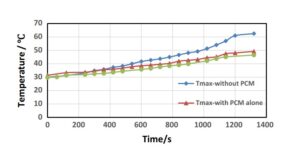 Figure 4: Cell temperature profiles during the discharge rate of 3°C [4]

A study from Advanced Materials Interfaces [5] used copper nanowires for TIMs. Since copper is cheaper than silver and gold, with a high bulk thermal conductivity, it makes the ideal material for TIMs. Figure 5 shows a SEM image of copper nanowires. 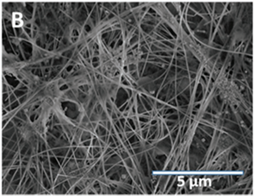 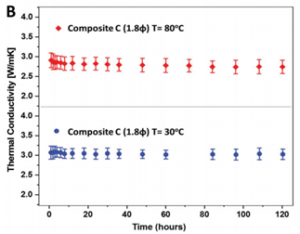 Figure 6: Thermal conductivity of nanowires at 30°C and 80°C 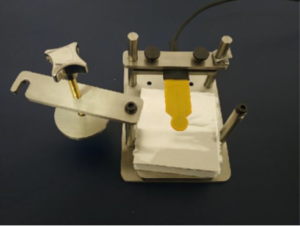 The data is summarized in Figure 8 above. The sample matched with the reference thermal conductivity values of aluminum within 1%. This shows the ability of Trident’s FLEX TPS Slab utility to test thin, conductive samples. 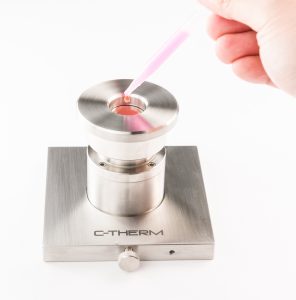 The C-Therm MTPS (Modified Transient Plane Source) method is ideal for characterizing the thermal conductivity of PCMs, as it has the ability to test the solid and liquid states of a material continuously. The MTPS method is used to characterize:

Thermal Analysis Labs, a division of C-Therm, offers a wide range of thermal analysis testing. For more information on our testing services, please contact us directly at info@thermalanalysislabs.com, or call (506)457-0498.