Thermal interface materials (TIMs) are widely used to reduce the thermal resistance at the interface between two materials (often called thermal contact resistance). There are many different types of TIMs, ranging from thermal greases to thermal glues, thermal gap pads, and thermal adhesive pads. Of these, thermal greases (Figure 1) are popular because they tend to be easy-to-use, non-toxic, and non-permanent solutions to the thermal contact resistance problem.

Thermal greases are difficult for many traditional methods of thermal conductivity testing to analyze: They are highly viscous, resulting in a very slow pour rate. As a result, air can become entrapped within the material and artificially deflate its thermal conductivity.

The unique planar, one-sided and one-directional thermal conductivity measurement provided by the C-Therm Trident system provides a useful tool for the performance verification of thermal grease compounds, as the grease may be applied directly to the sensor surface, minimizing the formation of bubbles and enabling a uniform sample distribution over the sensor. Additionally, the small sensor surface area, short test time, and the optional small volume test kit result in a very small sample volume (< 2 mL) required to obtain good data, reducing the wastage in quality-control applications and the synthetic demand in research applications. 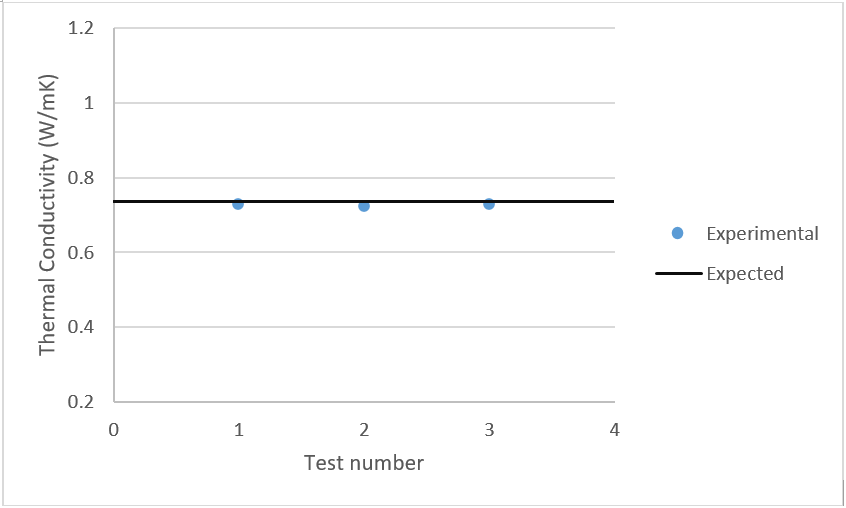 The C-Therm Trident system was used to test the thermal conductivity of a thermal grease compound. The observed value was referenced to the manufacturer’s specification for the grease’s thermal conductivity performance. The grease was found to test within 2% of the manufacturer’s specifications on all tests. The mean of three tests of five measurements each was 0.727 W/mK. The relative precision for each of the three tests was 0.4%, 0.3%, and 0.2%, respectively, and the relative standard deviation across the three tests was 0.5%.