Differential scanning calorimetry (DSC) is a thermal analysis method that monitors the heat absorbed or released from a sample as a function of temperature. The data collected can be used to measure heat capacity, heat of melting/crystallization, and glass transition, etc. As the temperature changes, this allows different transitions of the material such as denaturation, transitions, and reaction. DSC method has been used since mid-20th century and have been commonly used in many industries such as pharmaceuticals, polymers, and food etc.

Although DSC has many applications, DSC can be a destructive analysis, some would prefer to preserve the sample material or at least utilize micro-samples, that is when micro differential scanning calorimetry (μDSC) comes in (sometimes called 3D Calorimetry or Tian-Calvet calorimetry). This allows us to work with small amounts of the sample without deconstructing the sample structure.

Like DSC, μDSC also performs the same operation as mentioned before. Hence, offering an alternative of a smaller sample while obtaining thermal information. At our laboratory, our Micro DSC measurements was acquired from SETARAM Micro-DSC VII calorimeter. Our μDSC can be used for small quantities of sample, but it is applicable for large volumes of samples that have low density properties. It could also used to measure the small amounts of heat effects of the sample. 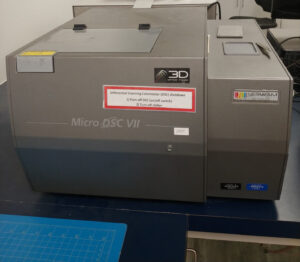 Our in house μDSC can also study any forms of samples as well, many of our clients would take this opportunity to study life sciences applications such as protein folding and protein denaturation. Similarly, clients are interested in testing liquid samples as well, liquid itself have a small change in heat effects therefore, μDSC is appropriate to study the heat effects of aggregation in liquids.

Research conducted by Fuel, Emulsion effects on the yield stress of gelled waxy crude oils, looked at the emulsion effects of two waxy crude oil. This was determined by looking at the Wax Appearance Temperature (WAT) measured by DSC VII from SETARAM. Wax Appearance Temperature, also known as cloud point, is very important measurement in the oil industry. It is the temperature where the first wax crystal starts to precipitate out from crude oil. When the wax molecules develop into a solid structure, it can cause crude oil to experience a gel fluid with low flow ability. Thus, determining WAT helps to predict and prevent the occurrence of wax deposition [1]. The WAT was obtained in a crystallization temperature graph from an unstructured state. Results can be seen below. 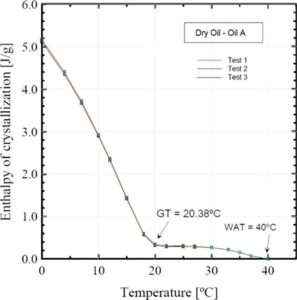 Figure 2 Enthalpy of crystallization vs Temperature [2] 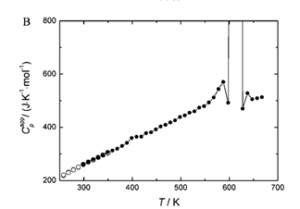 To preform a μDSC analysis, two blank crucibles are required for reference test. Afterwards, one of the crucibles are to be taken out for sample preparation. Samples only needed a small fraction amount of  the weight (at least 20 mg). Finally, set your experimental conditions to be used for analyzing the sample. 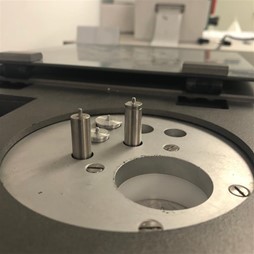 In a paper published at Heritage Science, micro differential scanning calorimetry and micro hot table method for quantifying deterioration of historical leather, they were using μDSC to determine thermal   properties with items from nineteenth century. The mass of the sample used was 2mg, the sample has been heated in water to detect hydrothermal stability at a rate of 2°C per minute which complies with the standard test method of ASTM D6076-18. After collecting the data, they have grouped the historic leather in three domains: “leather-like”, “parchment-like” and “gelatine-like” [4]. A SETARAM Micro-DSC III was used to determine the heat capacity. Results from their work can be seen below. 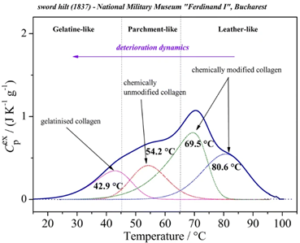 The data above demonstrates the capabilities of μDSC can offer. It measures the heat effects of the micro-materials  and provides accurate results [3]. Therefore, μDSC provides accurate thermal analysis while having small sample requirements. It also minimizes the sample material from being destroy.