With the world turning to renewable energy as its resources are being depleted, researchers and scientists around the world are working to develop ways to utilize renewable energy in hopes to create a more sustainable way of life. However, irregularities in environmental conditions have made this task challenging. There is an emphasis on developing consistent energy sources that can provide reliable energy despite weather/environmental conditions. One way scientists are tackling this challenge is by employing thermal energy storage mechanisms. 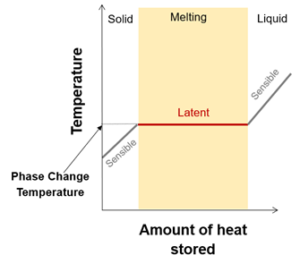 In a study published in the Journal of Nanomaterials, Liye Zhang et al investigate the thermal conductivity of nanofluids containing silver nanowires (AgNWs) of different sizes (Figure 3). Size/shape of thermal additives is largely unexplored, with the default shape being spherical. In this study, spherical AgNWs are compared to those with a larger aspect ratio. The Hamilton-Crosser modification of Maxwell’s Law was used in this study to predict the thermal conductivity while considering the effect of the thermal additive size/shape: 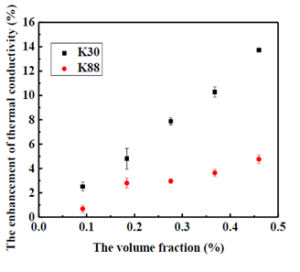 It is not possible to understand the kinetics of a thermal energy storage material unreservedly without first understanding its thermal conductivity. When PCMs are impregnated with high thermal conductivity additives, heat can spread at a faster rate. This leads to faster responsiveness to changes in temperature and therefore increases the heat transfer efficiency.

The second case study emphasizes the importance of thermal additive size/shape. To maximize the efficiency of the PCM for thermal energy storage and heat transfer efficiency, it is important to control the thermal additive composition as well as its aspect ratio.

C-Therm Technologies produces powerful thermal analysis instruments that can measure various thermal properties, such as thermal conductivity, in solids, liquids, powders, and pastes. Accurate measurements are available in seconds, with extremely high reproducibility. Trident is the most powerful thermal analysis instrument on the market, with the ability to test a substantial range of sample compositions. To learn more, contact us at info@ctherm.com