Thermal management is becoming more important with the miniaturization of electronic components causing high heat flux during system operations. It was estimated by Cohen that electronic components with temperature increases of 2 °C would result in a decrease in stability of 10% [2], which ultimately results in a significantly reduced lifecycle of the component. Thermal adhesives are a subset of thermal interface materials packaged as a binding agent, typically in paste and tape form, used to improve thermal management. The adhesives become particularly useful when dealing with limited space in an electrical system/enclosure, allowing for the replacement of mechanical mounting assemblies. They contain significant concentrations of thermally conductive filler materials such as ceramics, metals, or inorganic particles [3].

The adhesives provide an attachment point for electronic components while maintaining a uniform path for improved heat dissipation by reducing the air gaps between the materials, as shown below in Figure 2. Air has a very low thermal conductivity which is undesirable for heat transfer. Applications include binding heat-generating components to heat sinks/spreaders, applying underfill to PCBs, and component encapsulation [4]. Thermal adhesives are also used in various construction applications, including enhanced thermal management in buildings by improved heat transfer through walls and floors/ceilings.

Selecting a proper thermal adhesive will require careful consideration of the application’s needs. Thermal conductivity, the property that describes a material’s ability to conduct heat [6], is one of the critical performance attributes of adhesives that impacts the overall thermal management of the system (see figure below). The thermal conductivity is dependent on the adhesive material and may be influenced by the quantity of filler and the quality of filler dispersion. As a rule of thumb, the higher the thermal conductivity, the better the heat transfer through the adhesive bridge; however other characteristics must also be considered when choosing the appropriate adhesive. 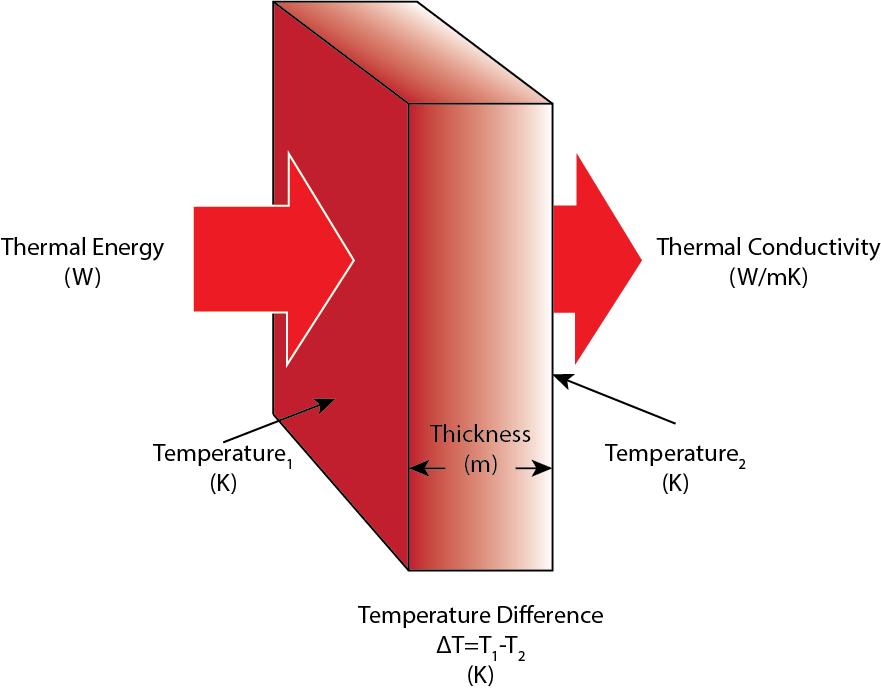 The contact resistance between the adhesive and bonded materials is another critical performance attribute, describing the degree to which the adhesive has removed the trapped air between itself and the substrates. The contact resistance is typically determined by the adhesives’ ability to deform due to contact pressure [7] (i.e., How well they can fill the air gaps). For example, when considering conductive fillers for a thermal adhesive, graphene nanoplatelets provide excellent thermal conductivity but do not deform easily with pressure. These properties make them a desirable material for smooth surfaces, whereas the carbon black filler has a lower conductivity but a higher malleability, being a better choice for uneven surfaces [8]. The selected adhesive will also depend on the application components; for instance, if the bonded element is susceptible to short circuits, a compound with very high electrical resistivity is required to insulate any potential current paths properly.

The following is a summary of the paper from the Department of Nanoscience and Engineering, Center for Nano Manufacturing, Inje University (seen in figure below), and EM R&D Center, Duksan HI-METAL Co., Ltd. The paper explores copper-graphene composite materials as a competitive substitute for the high-priced silver conductive filler [9]. 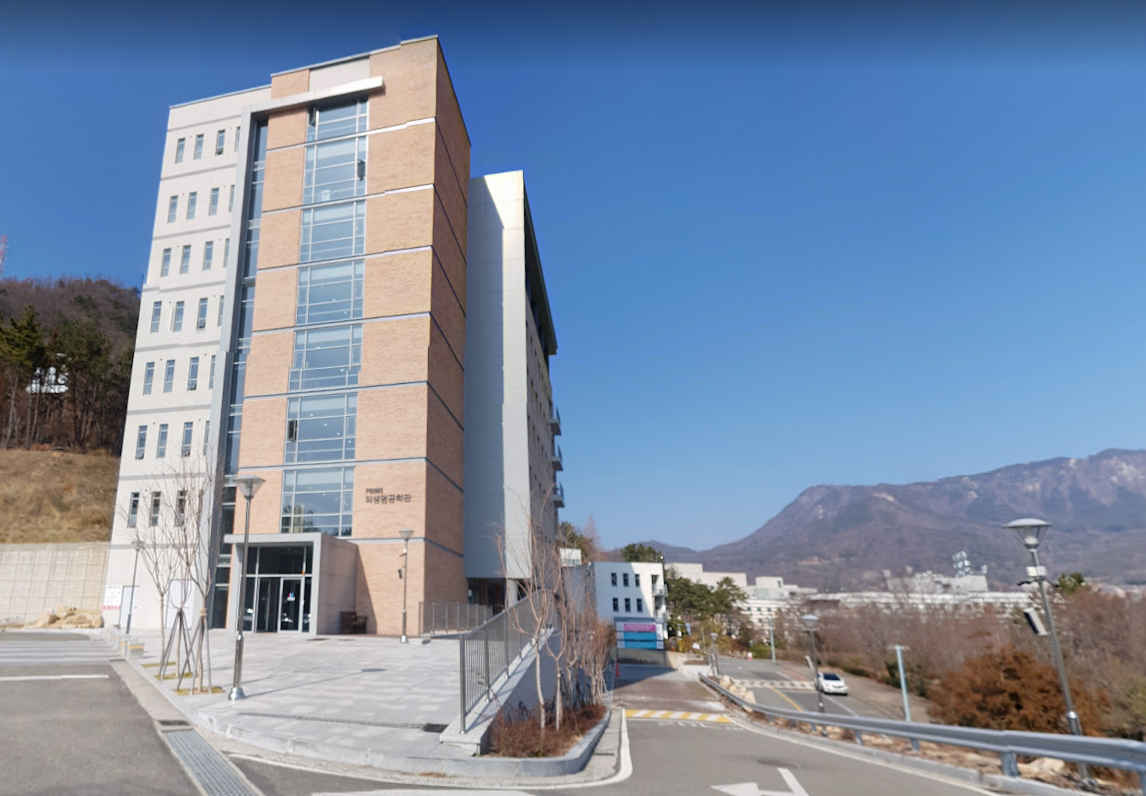 Figure 4: The Center for Nano Manufacturing, Department of Nanoscience and Engineering, Inje University [10]

Silver is an actively used filler in the market due to its high thermal and electrical properties (conductivity); however, the high price of the material has individuals in the field attempting to find a more affordable option with competing characteristics. Copper is a material identified as the most comparable (in terms of thermal and electrical conductivities) to silver; however, it is much more easily corroded and oxidized. This led to the composition of silver-coated copper, which was introduced into the commercial market; however, further price reductions were still desired. Thus, a graphene-based filler was fabricated to replace the existing expensive Ag-coated copper filler.

Graphene-oxide is naturally an electrically insulating material due to its disrupted pi bonds; however, the bonds may be restored due to GO reduction. In this case, GO was prepared using Hummer’s method, with rGO being obtained from the GO due to the reducing agent hydrazine. The resulting rGO has a reduced number of oxygen molecules, making the material electrically conductive. The copper particle surface had its organic layer removed and was functionalized by 2,2’-Bithiophene to form self-assembled monolayers, which provide means for preparing covalent bonds with the functional groups of rGO. The SAM also protects against oxidation, which is required when removing the organic layer. The binding material used was comprised of liquefied epoxy and a hexafluoride-based catalyst. 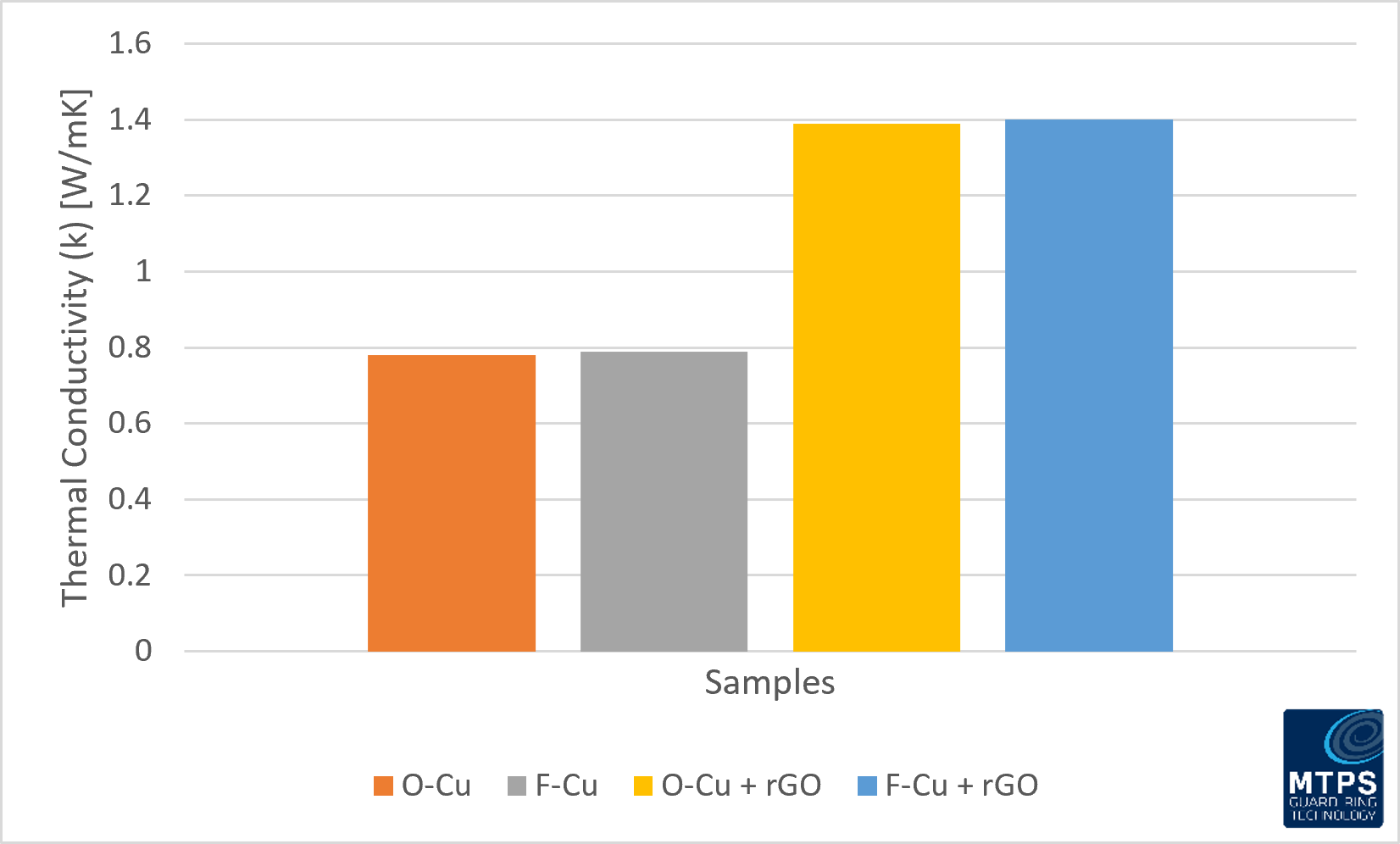 As mentioned above, the thermal conductivity was measured using the MTPS method from C-Therm Technologies. The MTPS method is in accordance with ASTM D7984, and as seen in the figure below, is a simple “plug-and-play” method that allows for testing of liquids, solids, powders and pastes across a wide temperature range (-50ºC to 200ºC), allowing for measurements of thermal adhesives in all forms. 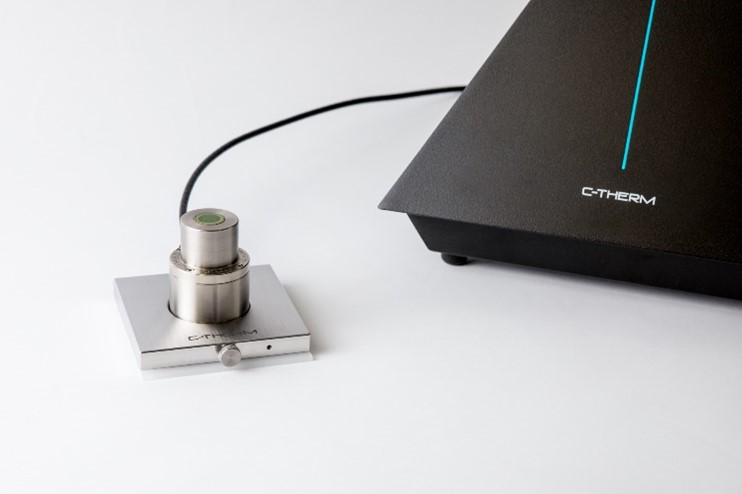 This blog is a part of our Thermal Interface Materials (TIMs) & Dielectrics application.