Written by Kurt Beschorner, Elizabeth Ibata-Arens, and Tevis Jacobs from the University of Pittsburgh

Shoe designers often incorporate materials that absorb energy to prevent injuries during high-impact activities like running. Surprisingly, energy-absorbing materials are also important for ensuring friction between the outsole (bottom of shoe) and floor surface occurs to prevent slips. The friction that develops between shoes and floor surfaces is partially caused by hysteresis friction, which forms when an energy-absorbing material, like shoe outsoles, slides against a rough hard surface, like a floor. The relative sliding between a rough floor and a shoe causes the shoe material to repeatedly compress and relax in response to alternating peaks and valleys in the floor roughness. Each time this happens, energy is absorbed by the shoe’s outsole material, which contributes to friction [1]. Hysteresis friction is particularly important since it is not strongly influenced by the presence of liquids like water or oil and can therefore offer friction in the most slippery conditions.

The measure commonly used to assess the energy absorption of a material is the loss factor tan(δ). The loss factor is a ratio of the energy lost over the energy stored and is dependent on the material formulation, the temperature, and the frequency of load cycling. The process of measuring this property is known as dynamic mechanical analysis (DMA). Floor roughness occurs across a range of scales from the nanometer to the centimeter scale, which cause a wide range of load cycling frequencies, i.e., larger-scale features cause lower-frequency load cycling and smaller-scale features cause higher-frequency load cycling. This means that a fascinating and complex interaction occurs between the topographical features of a floor surface and the material properties of the shoe surface. Our research team at the University of Pittsburgh (Human Movement and Balance Lab and the Jacobs lab) has been conducting experiments to understand these interactions. While DMA is used extensively to predict the friction performance of tires and tire materials, its relevance to shoe-floor friction is only just emerging. In this post, we will describe some of the results from our research to relate DMA to shoe-floor friction.

Against three porcelain tiles from the Lombardia line of the Fired Earth Ceramics:

The experiments were conducted using the STEPS device (XRDS Systems, Andover, MA, Figure 1)) using “biofidelic” dynamic conditions (i.e., conditions similar to the shoe during slip initiation) [2]. Canola oil was used to cover the floor surface to reflect a slippery condition and tests were conducted at room temperature. Nine tests were averaged across three replicate trials and across three different days for each shoe and floor combination. 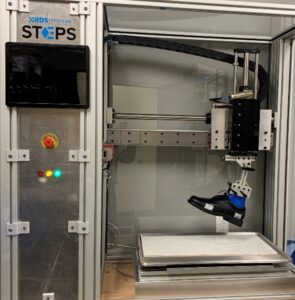 DMA tests: Three shoe materials were tested by C-Therm Technologies Ltd. On a Metravib DMA+150, shown in Figure 2. Samples (13-mm diameter discs with a thickness of 2-3 mm) were extracted from the shoes. Samples were tested using a temperature range (-50°C to 40°C) and frequency sweep (1-200 Hz) in the shear mode configuration.  This was selected to replicate the shoe sole’ mode of deformation during sliding. Because materials cannot easily be measured at high frequencies (>10 kHz), we used a technique called time-temperature superposition(TTS) where higher frequency material response is simulated by lowering the temperature of the material. This technique allowed us to generate a master curve, which represents the frequency response of the material over 9 decades of frequencies (1 Hz to 100 MHz). Cole-Cole plots were used to plot the relationship between the energy loss and the energy storage in response to deformation. By examining overlap between these curves across different load cycling frequencies, we were able to confirm that the underlying time-temperature superposition assumptions were met. 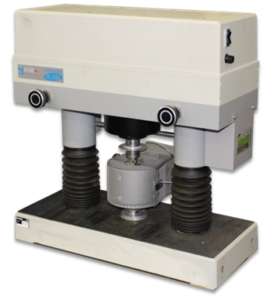 The results indicated a wide deviation of friction performance across the shoe materials. The effect of the shoe was generally consistent across the three floor materials. Shoe C had much higher coefficient of friction (COF) than Shoe B, which had moderately higher COF than Shoe A (Figure 3). The shoe materials also deviated in terms of their DMA response (Figure 4). At low to moderate frequencies, Shoe C had the greatest loss factor followed by Shoe B and then Shoe A. At approximately 1 MHz, Shoe A intersects with Shoe B and at 100 MHz, Shoe A intersects Shoe C. In the region of the DMA from about 1 Hz to 100 kHz, the loss factor results demonstrated substantial deviation across the shoe materials consistent with the rank order of the COF data.

Figure 3: COF bar graph for the 3 shoes and 3 floor surfaces. 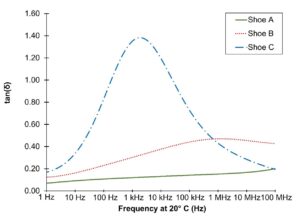 Figure 4: Dynamic-mechanical-analysis master curves of the outsole materials for each of the shoes. The curves were developed from frequency and temperature sweeps.

This study provides preliminary evidence that DMA may provide insight into friction performance across shoe outsole materials. The loss factor, tan(δ), results contained the same rank across the shoe materials as the COF data for most of the frequencies that were measured. The direction of this effect (higher loss factor associated with higher COF) was consistent with expectations. We should note that DMA is not the only relevant variable for shoe friction performance and that other factors including tread drainage patterns, tread surface area, heel shape, and material hardness have also been associated with shoe-floor friction [3, 4]. However, DMA may provide opportunity to further explain friction variation especially between slip-resistant and non-slip-resistant shoe materialsin which prior research has not adequately explained portions of the variability [5]. Another note of interest is that the range of frequencies that were identified as potentially relevant in this analysis is as high as 100 kHz. DMA testing at 100 kHz typically requires reliance on TTS (using lower temperatures to simulate higher frequencies) since DMA devices are not typically capable of testing at these frequencies. Therefore, this study also indicates the potential for conducting DMA below room temperature to infer relevant material responses at higher frequencies.

This research was funded by the National Institute for Occupational Safety and Health (R21OH012126). We would like to thank Travis Parkman of C-Therm Technologies Ltd. for conducting dynamic mechanical analysis of the shoe samples.

Thermal and Elastic Performance of Footwear

More information on the Metravib DMA