What is Coefficient of Thermal Expansion (CTE)? How Do I Measure It?

THE COEFFICIENT OF LINEAR thermal expansion (CTE, a, or a1) is a material property that is indicative of the extent to which a material expands upon heating. Different substances expand by different amounts. Over small temperature ranges, the thermal expansion of uniform linear objects is proportional to temperature change. Thermal expansion finds useful application in bimetallic strips for the construction of thermometers but can generate detrimental internal stress when a structural part is heated and kept at constant length.

For a more detailed discussion of thermal expansion including theory and the effect of crystal symmetry, the reader is referred to the CINDAS Data Series on Material Properties, Volumes 1 to 4, Thermal Expansion of Solids (Ref 1).

Definition of Coefficient of Thermal Expansion

Most solid materials expand upon heating and contract when cooled. The change in length with temperature for a solid material can be expressed as:

where l0 and lf represent, respectively, the original and final lengths with the temperature change from T0 toTf.  The parameter a1 CTE and has units of reciprocal temperature (K–1) such as µm / m · K or 10–6/K.

Heating or cooling affects all the dimensions of a body of material, with a resultant change in volume. Volume changes may be determined from:

where delta V and V0 are the volume change and original volume, respectively, and aV represents the volume coefficient of thermal expansion. In many materials, the value of aV is anisotropic; that is, it depends on the crystallographic direction along which it is measured. For materials in which the thermal expansion is isotropic, aV is approximately 3a1.

How To Measure Coefficient of Thermal Expansion

To determine the thermal expansion coefficient, two physical quantities (displacement and temperature) must be measured on a sample that is undergoing a thermal cycle. Three of the main techniques used for CTE measurement are dilatometry, interferometry, and thermomechanical analysis. Optical imaging can also be used at extreme temperatures. X-ray diffraction can be used to study changes in the lattice parameter but may not correspond to bulk thermal expansion.

Mechanical dilatometry techniques are widely used. With this technique, a specimen is heated in a furnace and displacement of the ends of the specimen are transmitted to a sensor by means of push rods. The precision of the test is lower than that of interferometry, and the test is generally applicable to materials with CTE above 5×10–6/K (2.8×10–6/°F) over the temperature range of –180 to 900 °C (–290 to1650°F). Push rods may be of the vitreous silica type, the high-purity alumina type, or the isotropic graphite type. Alumina systems can extend the temperature range up to 1600 °C (2900 °F) and graphite systems up to 2500 °C (4500 °F). ASTM Test Method E228 (Ref 2) cove the determination of linear thermal expansion of rigid solid materials using vitreous silica push rod or tube dilatometers.

With optical interference techniques, displacement of the specimen ends is measured in terms of the number of wave lengths of monochromatic light. Precision is significantly greater than with thermomechanical dilatometry.

Measurements are made with a thermomechanical analyzer consisting of a specimen holder and a probe that transmits changes in length to a transducer that translates movements of the probe into an electrical signal. The apparatus also consists of a furnace for uniform heating, a temperature-sensing element, calipers, and a means of recording results. ASTM Test Method E831 (Ref 4) describes the standard test method for linear thermal expansion of solid materials by thermomechanical analysis. The lower limit for CTE with this method is 5 × 10–6/K (2.8 × 10–6/°F), but it may be used at lower or negative expansion levels with decreased accuracy and precision. The applicable temperature range is –120 to 600 °C (–185 to 1110 °F), but the temperature range may be extended depending on instrumentation and calibration materials.

With respect to temperature, the magnitude of the CTE increases with rising temperature. Thermal expansion of pure metals has been well characterized up to their melting points, but data for engineering alloys at very high temperatures may be limited. In general, CTE values for metals fall between those of ceramics (lower values) and polymers (higher values). Common values for metals and alloys are in the range of 10 to 30×10–6/K (5.5 to 16.5×10–6/°F). The lowest expansion is found in the iron-nickel alloys such as Invar. Increasing expansion occurs with silicon, tungsten, titanium, silver, iron, nickel, steel, gold, copper, tin, magnesium, aluminum, zinc, lead, potassium, sodium, and lithium.

Low-expansion allows are materials with dimensions that do not change appreciably with temperature. Alloys included in this category are various binary iron-nickel alloys and several ternary alloys of iron combined with nickel-chromium, nickel-cobalt, or cobalt-chromium alloying. Low-expansion alloys are used in applications such as rods and tapes for geodetic surveying, compensating pendulums and balance wheels for clocks and watches, moving parts that require control of expansion (such as pistons for some internal-combustion engines), bimetal strip, glass-to-metal seals, thermostatic strip, vessels and piping for storage and transportation of liquefied natural gas, superconducting systems in power transmissions, integrated-circuit lead frames, components for radios and other electronic devices, and structural components in optical and laser measuring systems.

The dimensional change of aluminum and its alloys with a change of temperature is roughly twice that of the ferrous metals. The average CTE for commercially pure metal is 24×10–6/K (13×10–6/°F). Aluminum alloys are affected by the presence of silicon and copper, which reduce expansion, and magnesium, which increases it. Its high expansion should be considered when aluminum is used with other materials, especially in rigid structures, although the stresses developed are moderated by the low elastic modulus of aluminum. If dimensions are very large, as for example in a light alloy superstructure on a steel ship or where large pieces of aluminum are set on a steel framework or in masonry, then slip joints, plastic caulking, and other stress-relieving devices are usually needed. In the aluminum internal-combustion engine piston that works in an iron or steel cylinder, differential expansion is countered by the employment of low-expansion iron cylinder linings, or by split piston skirts and non expanding struts cast into the piston.

Plain chromium stainless steel grades have an expansion coefficient similar to carbon (mild) steels, but that of the austenitic grades is about 11⁄2 times higher. The combination of high expansion and low thermal conductivity means that precautions must be taken to avoid adverse effects. For example, during welding of austenitic grades use low heat input, dissipate heat by use of copper backing bars, and use adequate jigging. Coefficient of thermal expansion must be considered in components that use a mixture of materials such as heat exchangers with mild steel shells and austenitic grade tubes.

The coefficient of thermal expansion is an important factor when welding two dissimilar base metals. Large differences in the CTE values of adjacent metals during cooling will induce tensile stress in one metal and compressive stress in the other. The metal subject to tensile stress may hot crack during welding, or it may cold crack in service unless the stresses are relieved thermally or mechanically. This factor is particularly important in joints that will operate at elevated temperatures in acyclic temperature mode. A common example of this is austenitic stainless steel / ferritic steel pipe butt joints used in energy-conversion plants.

Rigaku’s industry leading differential TMA is the instrument of choice when measuring low-expansion materials, and when accuracy is important. In differential TMA, the reference material is run at the same time as the sample, so you can streamline your testing. The Rigaku differential TMA can be configured for a wide temperature range of -150C to 1500C, and for different sample sizes, including thin films. 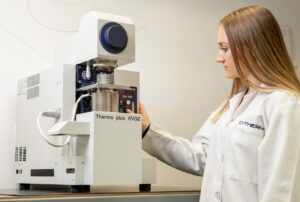 A scientist using the Rigaku Differential Thermomechanical Analyzer (TMA), offered in the USA by C-Therm Technologies. Able to accurately measure the coefficient of thermal expansion.

C-Therm represents Rigaku thermal analysis (DSC, STA, and TMA) in the US. Click here to learn more about bringing CTE testing in house.

Thermal Analysis Labs, a division of C-Therm Technologies, offers CTE measurements in a wide temperature range (-70C to 1500C). For a full list of testing services, please visit our website or send us an email at info@thermalanalysislabs.com. 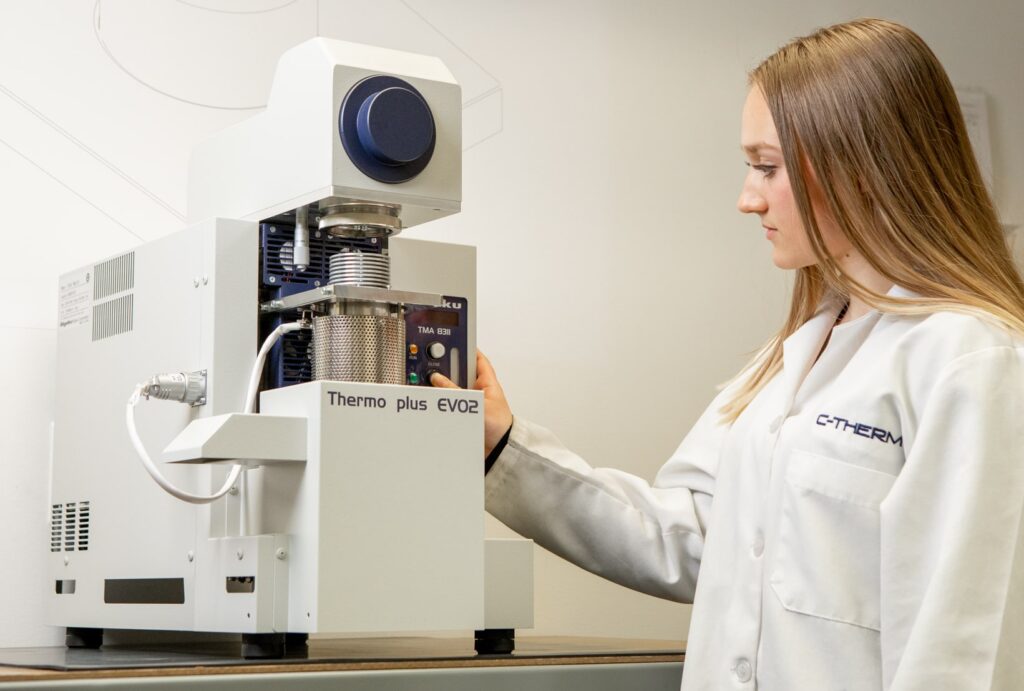 Are you interested in bringing Thermomechanical Analysis
(TMA and Dilatometry) in house?