In Southeast Asia, large amounts of agricultural by-products are wasted each year and emerging as a major source of environmental pollution. There have been many studies on developments of high-performance bio-based materials from food waste due to their abundant sources, biodegradability, and relatively pollution-free of agricultural waste. Our clients at HCM (Hochiminh City University of Technology) of Technology and NUS (National University of Singapore) have recently found an interesting way to convert pineapple waste into a high engineering value product for practical applications. The researchers have successfully developed flexible cellulose aerogels from raw pineapple-leave fibres (PALF) by using an adhesive agent, polyvinyl alcohol (PVA), and deionized (DI) water as a solvent, followed by a freeze-drying process.

The PF aerogel samples were prepared through multiple processes and they were fabricated at various fibre concentrations, 0.5, 1.0, and 2.0 wt.%. To test the thermal insulation abilities of the fabricated aerogels, the researchers measured K-values via the C-Therm MTPS sensor. As shown in the table below, the thermal conductivities for all the developed aerogels were extremely low (0.030 – 0.034) W/mK, making them excellent thermal insulators.

The thermal path through the aerogel consisted of air and fibre paths; an increase in fibre concentration increased the fibre pathways, with a consequent increase in the overall thermal conductivity. The low thermal conductivity, the eco-friendliness of cellulose aerogel, and the cost-effectiveness of pineapple waste make PF aerogel a promising candidate for the future heat insulation applications. The thermal conductivity of PF aerogels was comparable to that of good insulation materials such as wool (0.03 – 0.04) W/mK, silica aerogels (0.026 W/mK), recycled cellulose aerogels (0.032 W/mK), and Aspen aerogels products (0.021 W/mK). 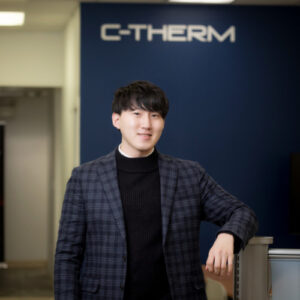 Ed specializes in helping researchers match their thermal analysis needs with the optimal instrumentation for their applications.