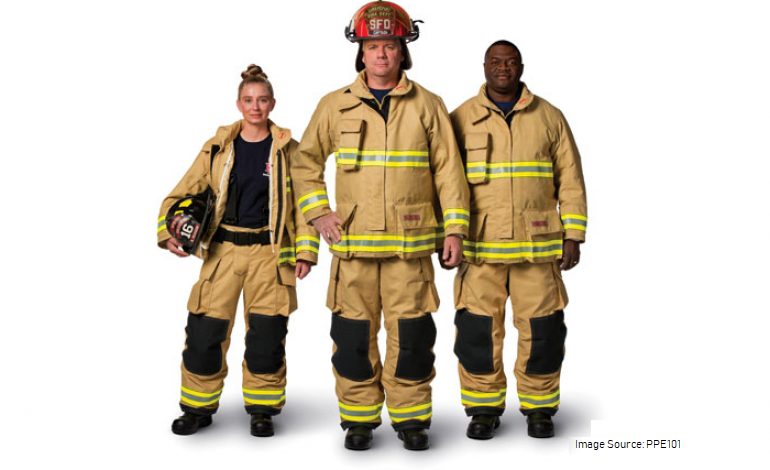 Work from Polish heat engineers published in the International Journal of Heat and Mass Transfer sought to explore that question, and to develop a method to predict how test results using simulated skin will translate to a real-world scenario, which has application to all forms of thermal PPE design.

Figure 1. Schematic of the heat-transfer system of firefighting PPE. (Source.)

The skin-PPE system consists of several layers (Figure 1). The outermost layer is the outer shell of the PPE, which provides the initial protection against the heat sources. Under the outer shell, there is an air gap between the outer shell and the moisture barrier which keeps the inner insulation dry. There is a second air gap between the moisture barrier and the insulation material which ensures the underside of the PPE stays at a safe temperature. Between the insulation and the skin, there is a third air gap. Finally, the skin itself consists of three layers: The relatively thin, protective epidermis, made up of dead skin cells; the dermis, a thick layer of tissue under the epidermis, which contains capillaries, hair follicles, connective tissue, nerve endings, and other structures, and the subcutaneous tissue layer, made up of fat cells, lymph vessels, blood vessels and other structures – all of which can be damaged in the case of a severe burn, potentially resulting in live-long complications, such as scarring or disability, or even death if the burn isdeep enough or covers a large enough area. For firefighters to fight fires without undue risk to life and limb, PPE must be sufficiently insulative to keep the firefighters’ skin below a temperature that would result in a burn injury.

In a recent paper, scientists from the Warsaw University of Technology built a heat-transfer model of the skin-PPE-heat source system and used that to derive the following relationship which related the test results using a skin simulant material, and what results would be expected with human skin:

Figure 2. Performance of the simple approximation detailed in the equation above for three heat-transfer cases.

The performance of this simple approximation is illustrated in the figure above.  For short exposure times, the simple approximation works quite well to predict performance of the clothing – within 3% accuracy across the full range. If greater precision, or longer exposure times need considerations, the authors also derived a more complicated relationship accounting for perfusion in the skin, which requires an inverse Laplace transform.

Learn more about how to measure thermal effusivity here: http://ctherm.com/applications/textiles/