C-Therm worked closely with researchers from Queen’s University (Kingston, Canada) to characterize the thermal conductivity of various aluminum powders for use in AM processes. The goal of the study was to determine if differences in the surface treatments of the same powder influenced effective thermal conductivity. In order to do so, the Modified Transient Plane Source (MTPS) technique was used, in accordance with ASTM D7984 modified for powders.

There are many different processes in additive manufacturing including: laser powder bed fusion, selective laser melting, binder jetting, energy deposition, among others. In each of these processes, one of the most crucial aspects of successfully manufacturing a component lies within knowing the selected material properties. Most commonly these materials are powders, and more frequently of interest in the industry, metal powders.

There is a myriad of material properties that can be studied on powders, in an almost infinite number of environments and circumstances. Thermal conductivity, effusivity, diffusivity, and specific heat capacity are among the most important thermal properties to understand. Here is a quick breakdown of each of these properties:

Thermal Conductivity– how much heat can move through a material under a specific temperature gradient, measured in Watts per meter Kelvin.

Thermal Effusivity– how quickly and how much heat is exchanged between a material and its surroundings, measured in Watts seconds square root per meter squared Kelvin.

Thermal Diffusivity– how quickly heat can move through a material, measured in milometers squared per second.

Specific Heat Capacity– how much energy it takes to raise the temperature of a material weighing 1 gram by 1 degree, measured in Joules per kilogram.

It is essential to measure these values because there is a long list of variables that affect the apparent thermal conductivity. Factors such as humidity, crystallinity, morphology, particle size, particle size distribution, packed density, apparent density, temperature, and the list goes on. Apparent thermal conductivity changes based on these variables and therefore testing under the proper conditions is the more reliable way to attribute these factors. Each of these properties relate to fundamental performance variation when powders are sintered and formed together to make a solid object. How these powders flow, melt, fuse, cool, and solidify must be well understood in order to design proper processes and techniques. Currently, these processes are modelled and simulated in advanced fluid dynamics software, in which these parameters are inputted by the user or pre-inputted based on an internal database. Many times, these parameters are misguided, inaccurate, or not accounted for at all. With the proper measurement, verification, and input of these properties, researchers and engineers can get a much better understanding of the process, and therefore optimize and predict outcomes more consistently.

C-Therm’s patented MTPS sensor technology (Figure 1) is ideally suited for testing powders, liquids, solids, and pastes, and is the optimal thermal conductivity method for powder samples with a particle size of less than 0.1mm (100 microns, 0.004 inches, 140 mesh). The MTPS sensor was developed in partnership with the US Navy to test small amounts of energetic materials in powder, paste, solid and liquid form safely and highly accurately. Only 2-mL of material is required to test on the MTPS sensor and the change in temperature at the sensor-sample interface is typically less than 2 degrees.

Furthermore, the MTPS method is capable of testing powders in various environmental conditions such as high temperature, high pressure, humidity, and saturation. This versatility is extremely powerful as it allows these tests to be conducted in an environment that is practically identical to what these powders experience during the manufacturing process. Armed with this information, researchers can more precisely measure and report the thermal properties of the feedstock powder material.

The two samples tested were a typical atomized AlSi10Mg powder (commonly used in many AM machines), and Toyo AlSi10Mg powder (a newly developed product by Toyo Aluminum K.K.). The Toyo sample was known to possess a consistently spherical morphology among the particles, a uniform size distribution and no detectable surface oxidation. The typical atomized powder sample on the other hand had exhibited an irregular morphology among the particles, a less uniform size distribution as well as a pronounced oxidized layer on all particles. This is seen in the SEM images in Figure 2.

Each powder was tested on the MTPS sensor 3 times, each test represents the average of 5 measurements. A consistent compaction of 75 grams was used on each test for repeatable results as shown in Figure 3.

The reported room temperature fluctuated between 26.1 and 28.3 degrees Celsius during the tests. The thermal conductivity and %RSD (Relative Standard Deviation) is reported in Table 1 and Figure 4.

Secondly, the typical atomized particles exhibit a very irregular and inconsistent shape. In contrast to the Toyo sample, which is more uniform in size and exhibits a consistent spherical particle shape, the typical atomized sample has less efficient packing and therefore a harder time creating a more cohesive lattice structure within the powder. This is important because typical approximations assume the powder to be a solid material and use the bulk thermal conductivity value, as described in Figure 5.

The irregular particle sizes and morphologies are creating less efficient packing, increasing the contact resistance between particles and decreasing apparent density, which in turn causes lower effective k. In other words, there are less interstitial air pockets between the powder particles which causes the heat to flow much more effectively than a non-uniform and irregular particle arrangement.

This brings up the point of compaction and density and how important the precise control of compaction is when testing powders. In this study, a 75-gram weight was used and about the same amount of material for each test. There was slight variation in between the tests of the same powder, as can be seen with the %RSD being 2.2% and 1.3% respectively. This was a result of the inconsistent temperature and humidity in the room, along with potential blend uniformity effects within the samples, as not the exact same scoop of powder was used for each test. Additionally, even the slightest variation in loading procedure will cause a variation in the effective thermal conductivity. This is why the Compression Test Accessory (Figure 7) is frequently used as it is able to precisely control the compressive force or displacement of the powder sample.

These results are a very good indication that chemical surface treatments (like an oxidizing layer) do influence the apparent thermal conductivity of the powders, and therefore the quality of the finished component. Having a better understanding of the thermal properties leads to better process management by controlling the power inputs, environmental conditions, and cooling procedures. This of course leads to improved quality, higher consistency, and decreased failure of additively manufactured components.

Special thanks to Dr. Vahid Fallah (https://me.queensu.ca/People/Fallah/) and his research team at the Department of Mechanical and Material Engineering at Queen’s University in Kingston, ON, Canada, as well as to Toyal America, Inc. (Toyo Aluminum K.K.’s branch in North America) for supplying the powders.

This article highlights the use of C-Therm’s Trident platform, equipped with the MTPS sensor for testing the thermal conductivity and effusivity powders. Trident can be configured with up to 3 different sensors for the best measurement tool for any situation and material. Find out more about Trident here. 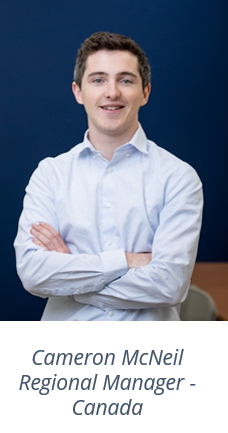 Cameron McNeil has a bachelor’s degree in Mechanical Engineering from the University of New Brunswick (2017) and has been with C-Therm since 2018. Cameron is passionate about advancing science and technology through novel and innovative processes, with an interest in the Additive Manufacturing and Nuclear Industries. Cameron manages business relationships within Canada for C-Therm and thermal analysis partner, Setaram Instrumentation. On the weekend, you can find him enjoying one of the various board games in his collection or golfing many of the spectacular courses on the east coast of Canada.

Comment on "Thermal Conductivity of AlSi10Mg Powders for Additive Manufacturing"